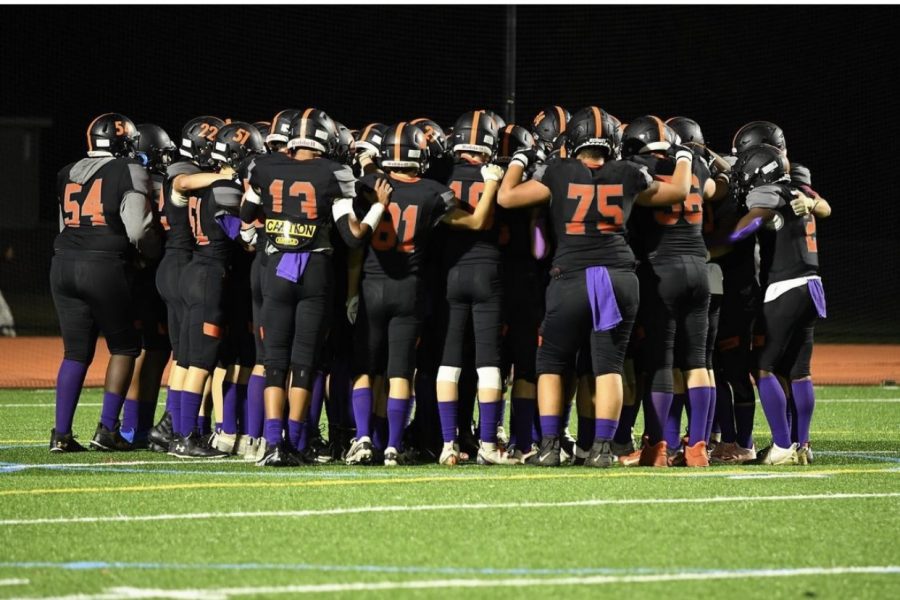 Coming off a huge 39-7 win over Newton South that clinched the DCL Small title, the Wayland football team approached their matchup against Lincoln-Sudbury with great momentum. Unfortunately, the undefeated Lincoln-Sudbury Warriors came out strong and destroyed Wayland 49-14 under the lights.

Although this was an anticipated game between two rivals, the game had another focus in mind. Oct. is Domestic Violence Awareness Month, and members of both communities showed out to support this cause. Players from both teams wore purple socks, armbands and wristbands.

Wayland fans showed their support by wearing all purple. At Friday night’s game, there was a tent covered in purple lights close to the entrance. There, spectators could donate to the Lauren Dunne Astley Memorial Fund. Lauren Astley, a 2011 Wayland High School graduate, was tragically murdered by her ex-boyfriend, Nathaniel Fujita. The goal of the game was to bring awareness to acts of domestic violence that have occurred in and around our community and prevent them from happening again.

Since Lincoln-Sudbury was ahead by more than 35 points heading into the second half, the clock was running for the entirety of the half. Lincoln-Sudbury also put in several backup players against Wayland’s starting lineup to prevent the score from rising that much more.

Senior Finn O’Driscoll made his presence known on both sides of the ball. Recovering a fumble forced by senior Ian Patterson and completing two tackles, O’Driscoll was one of the few defensive players who could stop the Lincoln-Sudbury offense. Senior captain Luciano Sebastianelli helped out by contributing three tackles and a sack. Unfortunately, the Wayland defense couldn’t slow down the powerful Lincoln-Sudbury offense from reaching their endzone on seven occasions.

King made his presence known as quarterback, throwing the only two touchdowns that the Warriors scored. His second touchdown pass occurred with about six minutes left in the fourth quarter as King passed to O’Driscoll in the endzone. The Warriors were only able to have 59 passing yards compared to Lincoln-Sudbury’s 179. They also only completed 114 rushing yards compared to Lincoln-Sudbury’s 221.

Although the Warriors were unable to pull out a win, they head into this week’s matchup with redemption on their minds. The Warriors will celebrate their Senior Night this Friday, Oct. 29 at home as they take on the 4-3 Westford Academy Grey Ghosts.