Opinion: “Let’s go, Brandon” proves that the GOP still has a lot of growing up to do 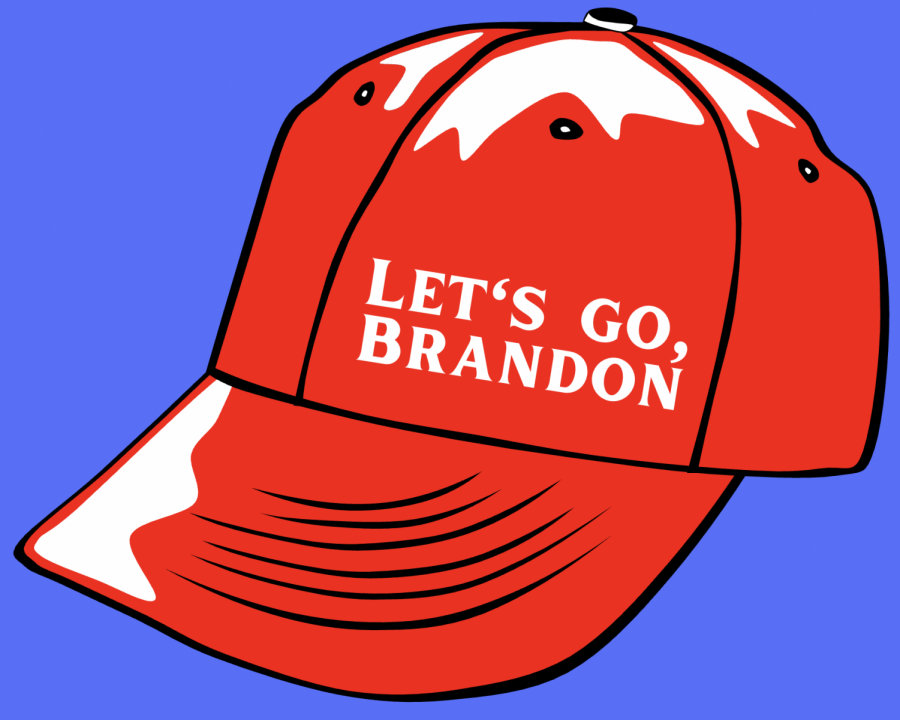 WSPN's Katya Luzarraga discusses the conservative slogan that has gained national recognition, its impact on political leaders and what it means for our future generations.

Being a political leader comes with great power and great responsibility to influence the world around you. In the past month, these ideals have been squandered by various Republican politicians as they promote the ultimate “f*** you” towards President Joe Biden in the form of the slogan, “Let’s go, Brandon.” Flaunting this right-wing slogan isn’t doing these politicians any favors.

The slogan received its origin story at a NASCAR race at the Talladega Superspeedway on Oct. 2. A reporter for NBC sports mistakenly thought a crowd in the stands was chanting, “Let’s go, Brandon” in support of driver Brandon Brown, who had just won his first national series victory. On the contrary, the grandstand of supporters in Alabama can be heard distinctly shouting “F*** Joe Biden.”

This unfortunate misinterpretation sparked a nationwide trend, gaining popularity amongst Republican party supporters and politicians. “Let’s go, Brandon” is the tipping point for a teetering nation divided by political affiliations. Standing in as a smoke screen, this conservative phrase allows anti-Biden people to voice their dissatisfaction without the disapproving eye of the public. To most of the world, “Let’s go, Brandon” flies over their heads, seeming like an innocent go-get-em. Rather quickly though, the chant has pushed its way into social media, bringing awareness to all the indecorous meaning behind “Let’s go, Brandon.”

At sports games, Congress House meetings, press conferences and rallies, “Let’s go, Brandon” echoes through the crowds, speaking louder than words with its not-so-hidden meaning. It’s like a mating call for fellow Republicans, showing that they’re in line with the party’s ideals. The right-wing slogan is another act of unity for the Republican party, adding onto the infamous Jan. 6, 2021 insurrection where Trump supporters stormed the Capitol Building to protest the Nov. 2020 elections.

At many college football games, “Let’s go, Brandon” flags and posters are proudly displayed in the stands, along with students leading chants of the “G-rated” dig at President Biden. College football games are a place where students go to enjoy the game, hang out with their friends and cheer for their school. While free speech is very much our first amendment right, bringing down a lighthearted sports game to parade your political opinions in everyone’s faces is not warranted on any level. Especially when you’re belittling the president of the United States. “Let’s go, Brandon” isn’t where the next generation should be steering us in terms of politics, and I blame it on who we look up to.

It’s disgusting to see political leaders, who are held at a very high standard in the public eye, to be advertising and encouraging a phrase that’s dishonoring our president and, in extension, the Democratic party itself. South Carolina Rep. Jeff Duncan posted a selfie on Facebook wearing a mask that had “Let’s go, Brandon” emblazoned on it. Below the post, the comments section was flooded with positive reinforcements of the “Let’s go, Brandon” movement. Facebook is a public platform, which means it’s open to everyone. I’m on Facebook, and nothing’s stopping me from seeing a state representative wearing a mask that has a distinct middle finger towards the president.

Grown adults like Duncan are setting an example to the next generation that it’s okay to make passive, childish insults at people they don’t like. Alongside Duncan, Florida Rep. Bill Posey ended a speech at a House meeting with “Let’s go, Brandon,” extending the reach of the right-wing slogan that condemns Biden all the way to Congress.

Clinging onto its hour of fame, “Let’s go, Brandon” slithers its way into the music industry as multiple music videos of the conservative catchphrase go viral. Pro-Trump artist Bryson Gray’s song, “Let’s Go Brandon,” kicked Adele out of the number one spot on iTunes, even with Youtube and Instagram banning it for spreading “false information.”

The song remixed the words “Let’s go, Brandon” for three minutes, with Gray bouncing back and forth in front of the screen. This song shows the level of desperation Republicans are willing to go to get public attention on their anti-Biden opinions.

Capitalizing on the popularity of “Let’s go, Brandon,” the Trump campaign team has advertised shirts with the slogan printed on them for any donations of $45 or above. Instead of scolding the Republican population for its lack of respect towards our president, Trump is taking advantage of every moment of free publicity for the conservative party. According to Trump, the phrase can be heard during the ordinary day, so why not have a t-shirt to match the occasion?

Trump and his supporters are stomping their feet in the midst of their nationalized tantrum to be acknowledged, and “Let’s go, Brandon” is the perfect way to validate their cry for attention. If our future is solely based upon the actions of our political leaders, they need to mature and send a better message to the next generation.