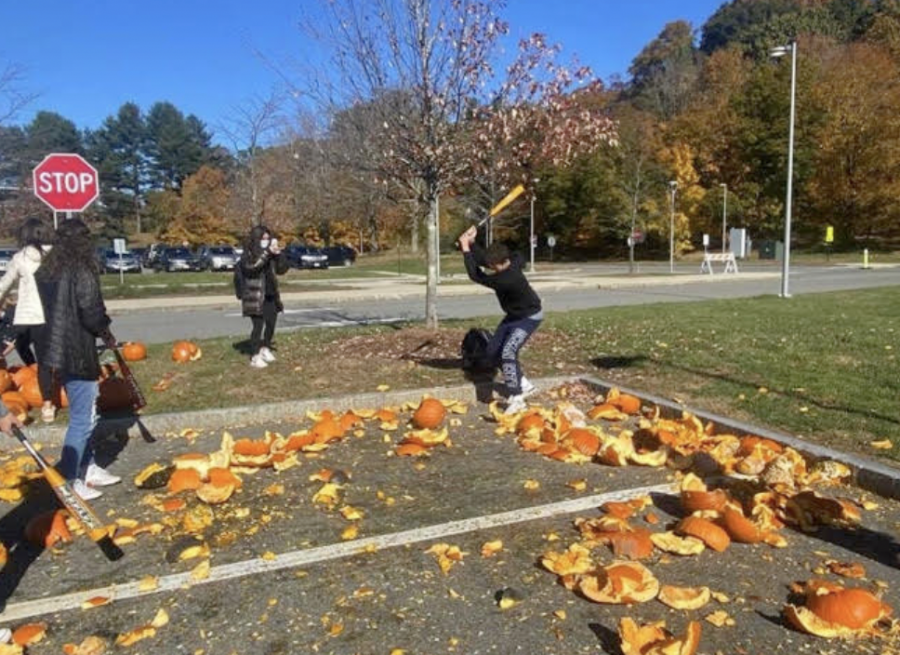 On Friday, Nov. 5, Wayland High School's senior class, Connect, hosted its first ever Pumpkin Smash. Students gathered during their lunches in the visitor parking lot ready to demolish some pumpkins. “I think the next class should host another Pumpkin Smash next year since it was a positive environment and helped students with stress.” junior Billy Burke said.

Wayland High School’s Connect class held the first ever Pumpkin Smash on Friday, Nov. 5 during all lunches. The event brought students together to help release stress as the first quarter of the year came to a close. The smash also allowed the pumpkin remains to be brought to a composting facility, which directly helps slow the process of climate change.

The WHS Connect class is a course that qualifies for both a social science and an English credit for high school seniors. It is a project based learning course that has mostly hands-on assignments. The 26 students who take the class read books, write essays and host events for the community. Connect has multiple different teachers, including Erin Lehmann.

“We look at real world issues and problems, and in particular, how they relate to Wayland’s community,” Lehmann said. “We try to get students outside of an actual classroom and into the community as part of their learning.”

Each fall, Connect hosts an event to benefit Wayland’s community. Usually, the students host a haunted house. However, due to COVID-19, the class was forced to come up with a new idea since the event could not be indoors.

“We thought we were going to be able to host a haunted house, but then the guidelines changed on who is allowed on campus, so ultimately it was decided we couldn’t run a haunted house,” Lehmann said. “Then we had to start thinking about a new project to do.”

As the class began figuring out the annual event, they were studying the issue of climate change and how climate change is affecting Wayland. The students watched the film “Kiss the Ground,” a documentary released in 2020 about how keeping soil healthy, by composting, can help mitigate climate change.

“The point of the Pumpkin Smash was to demonstrate the benefits of composting because climate change is a problem that we are facing right now, and it has to be tackled now by a bunch of people,” Connect student Isabella Donovan said.

The class visited many farms, including the Black Earth Compost Company, which works all around Massachusetts helping others to compost at homes, as well as different companies and schools.

While researching and visiting various places, the class came up with the idea of a “Pumpkin Smash,” similar to an event that had happened in Newton. The class found a video of Newton’s event and immediately became inspired to host their own.

“All of a sudden a light bulb went off and we were like ‘hey, we are looking for a community project, we are studying composting, let’s hold a pumpkin smash,’” Lehmann said. “[We thought] ‘next week is the end of the quarter, seniors are stressed out because college applications are due, everybody is stressed out because of projects and tests, wouldn’t it feel great to get our tension out by smashing pumpkins?’”

Immediately, the students started to plan for the event. Students were broken up into four different teams: leadership, media and marketing, logistics and activities. The students single handedly planned the event. Each day in class they would have a task sheet that listed tasks that had to be completed.

“We want students to get real world experience on how to figure out an event and then how to organize that event and ultimately pull it off,” Lehmann said.

Donovan coordinated the community wide pumpkin pick-up that helped provide the class with the pumpkins needed to have the event. The class sent out a Google Doc prompting students to say whether they would attend the event, and if they were willing to donate a pumpkin. Students and families could drop off pumpkins, or they could opt to have a Connect student pick it up at their home. Students estimate around 100 pumpkins were donated.

“[Students and families donating the pumpkins] took all that vegetable waste that would have ended up in landfills and actually sent it to a composting facility.” Lehmann said.

The event was a success, and during all three lunches students showed up to the visitor parking lot to attend the event. There were multiple stations offered to students prompting them to smash pumpkins by swinging at them with a baseball bat, throwing them on the ground or hitting them with a hammer. Junior Billy Burke attended the event and participated by hitting a pumpkin on the ground with a baseball bat.

“I attended it for fun and to decompress a little,” Burke said. “I believe that it helped with my stress.”

“The students gathered, shoveled, racked and picked up all these pumpkin parts and put them on a tarp,” Lehmann said. “They just thought they were going to lift the tarp onto the trailer, but the pumpkin guts all together definitely weighed more than a thousand pounds, so it didn’t budge.

“We planned more for the execution of the event, and the clean up was an afterthought,” Donovan said. “Because of the right circumstances, we were able to transport the pumpkins.”