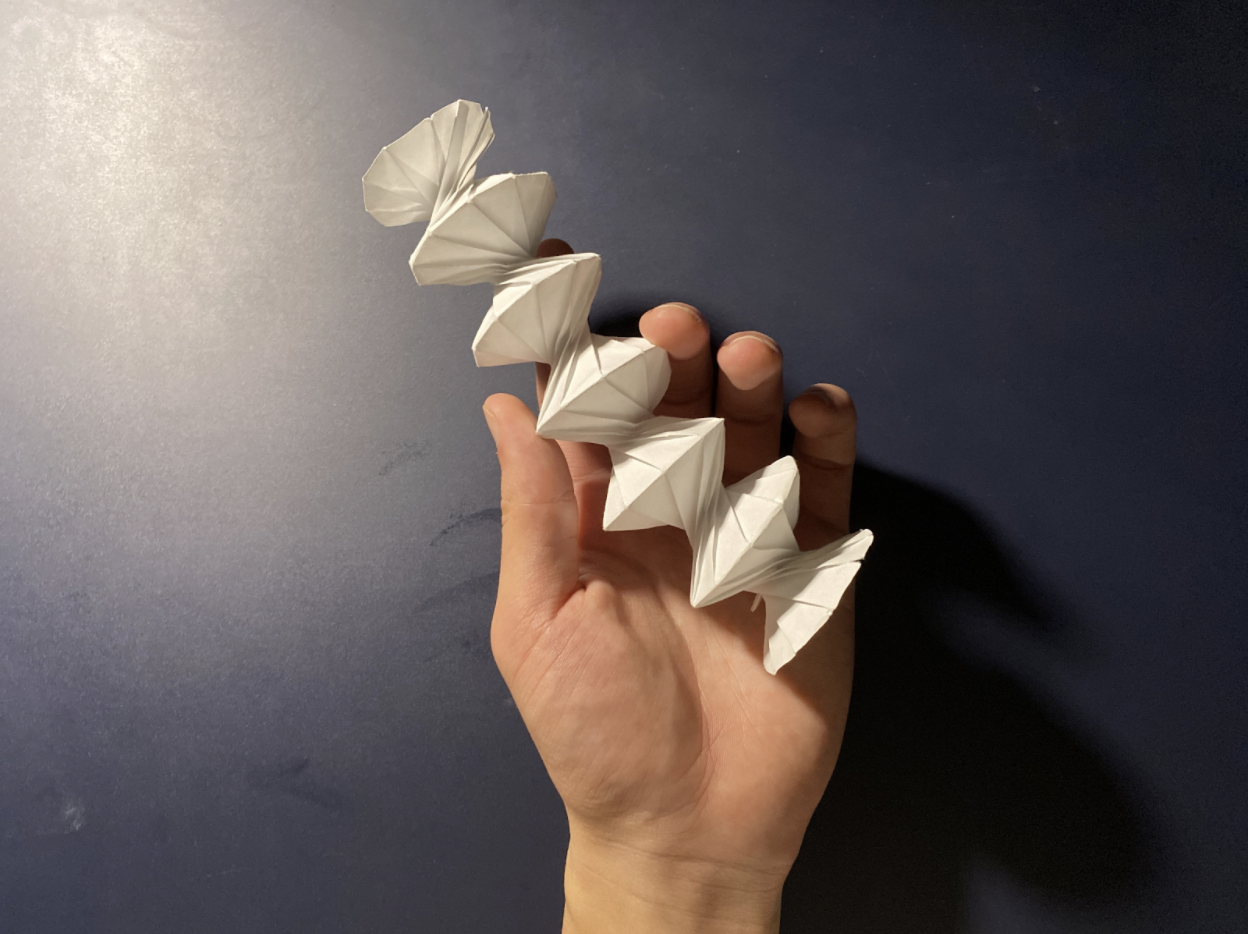 It might not look like it, but that’s all one sheet of paper. After many angular folds, Senior Lucas Pralle finished his spiral tessellation. “Getting the final model was the hardest part,” Pralle said. “But I really enjoy how origami tests my patience.” (Credit: Courtesy of Lucas Pralle)

It might not look like it, but that’s all one sheet of paper. After many angular folds, Senior Lucas Pralle finished his spiral tessellation. “Getting the final model was the hardest part,” Pralle said. “But I really enjoy how origami tests my patience.”

Not your average crane

Crease by crease. Fold by fold. Senior Lucas Pralle has spent the past eight years perfecting his form and expression of origami, a tradition started by the Japanese many years ago. He started as a fourth grader when he came upon a YouTube paper crane tutorial. Intrigued by his first experience, Pralle decided to pursue it further.

“So I started with online tutorials and that’s where I stayed for a while,” Pralle said. “It took me a bit to realize that YouTube tutorials didn’t cover much, so I started going to local bookstores to look for books with diagrams in them. I bought a bunch of them and also started experimenting with different papers so that meant not just the normal kami paper that you can purchase at Michaels.”

The more Pralle experimented with different papers, the more he realized that the process and final product changed with each piece. He searched deeper to see the actual connection between the different papers and feelings that he got.

“I learned the thickness and texture of the paper, as well as its pliability and stiffness, allow for either more strict sharp things or more organic smooth things,” Pralle said. “A very thin paper, for example, gives the artist room to do more detailed work without worrying about certain areas becoming too hard to fold. Soft thick paper can allow someone to shape and mold the paper into more animal type shapes. It gave me direction in what to learn and how to advance my craft.”

Realizing that there’s much more to learn than just following the crease instructions, Pralle really started to invest his time in origami. He found more meaning in origami than just challenging instructions.

“When I got more successful in following folding patterns, the pieces seem to come to life,” Pralle said. “The paper [was] able to hold different kinds of shapes or detail—a soft design might evoke warmth while a very detailed dragon might give off the feeling of regality and class. It’s like every other art in that way: music, drawing [and] even English.”

The similarities between origami and emotion doesn’t end there. Origami is also a way to process and escape from reality.

“There are too many complicated things in life,” Pralle said. “Origami to me is a way to escape all of those complexities and focus on an old and pure yet new and emerging art form. It’s a very cathartic art form and one that requires the most of its artist.”

Pralle has tried many different kinds of models, from the most simple paper crane to Robert Lang’s beetle folds. Each project could take up Pralle over a week. Origami artists can’t just sit and fold without stopping because the sweat from their palms could ruin the paper. That being said, even if Pralle could work continuously, his hardest projects would still take over half a day.

“It’s been a hard journey,” Pralle said. “I haven’t really had anyone to teach me. Not only that, but [origami is] an extremely hard artform and very restrictive, unlike drawing or painting where you have the freedom to put anything on the page. There are only so many folds you can make. That said, it’s very rewarding, and it’s an art form that I would stand behind as one of the best of the modern day.”