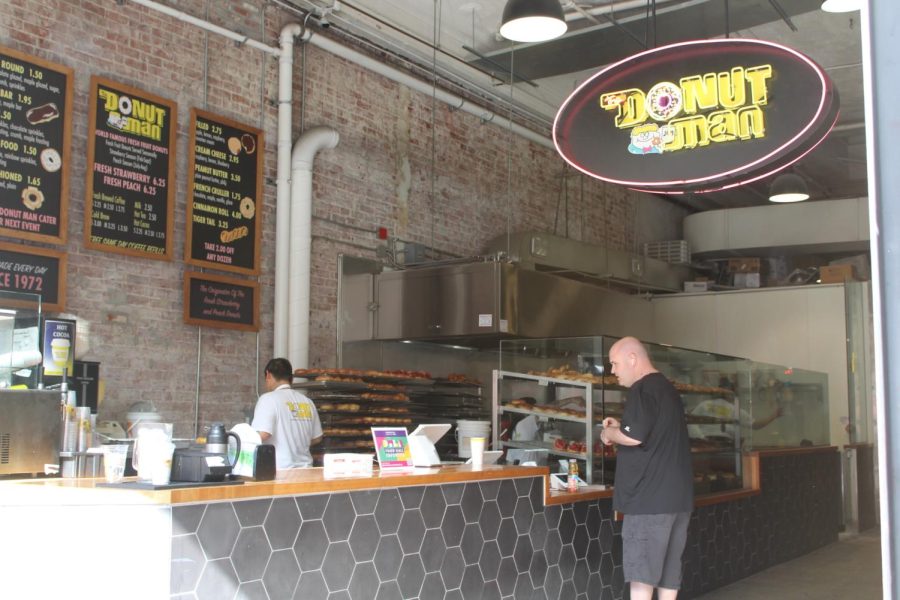 Miguel Pacheco and his coworkers take the orders of customers who have come to “The Donut Man.” The restaurant’s most popular donut is their strawberry donut which consists of sliced strawberries covered with a strawberry glaze. “We all know that we’re a little family at work, it’s just a nice camaraderie, and that’s my favorite thing about Los Angeles,” Pacheco said. “It’s nice. It feels like home.”

A Taste of Grand Central Market

The smell of spicy, savory tacos wafts into the air as customers make their way towards stalls, each with a scent hinting at their food, pulling their buyers in. Just 10 feet away from each other, about 20 restaurants and the hallways that border them are packed with people standing in line, waiting to place their orders. Customers shuffle from station to station, picking dishes from the varying assortments of food and cuisine they come across. Pans sizzle as they cook meat, knives chop through fresh produce and co-workers call to each other to pass ingredients. In the background, hip hop music plays, its beat adding liveliness to the space where people gather for a bite together.

Grand Central Market located in Los Angeles, California, has been the city’s center of cuisine from all around the world. Being established in 1917, it is over 100 years old and some of the businesses have been family’s legacies that have seen generations of customers from LA and from all over the world. The hall that stretches from one street to another is filled with stations of tacos, ramen, greek yogurt, fresh pressed juice and ice cream. After COVID-19, the restaurant business across the country came to a screeching halt – Los Angeles was no exception.

“Yeah, it’s been hard, but it’s mostly the fear of getting sick, you know, interacting with people when they’re close, but it’s been a lot better lately,” Miguel Pacheco said.

Pacheco works as an employee at The Donut Man, a restaurant in one of the corners of the market. The store opened on Jun. 26, 2020, toward the earlier stage of the pandemic, when many restaurants and shops around the world had to close temporarily or permanently due to the abrupt decrease in business. Once Grand Central Market reopened in the summer of 2020, as well as recent lifts on COVID-19 restrictions, the market’s liveliness slowly began to return to what people missed.

“I love the location, I love the people, I like the vibe,” Pacheco said. “You know, it’s just that alley of vibe. People who are from LA or around here, [for them] it’s chill.”

“There are so many different types of people that come here because it is a ‘tourist spot’, so a lot of people from other countries are always here, and that’s pretty cool,” Stevens said.

The Grand Central Market’s diversity is something that employees enjoy, but is also something that lets customers explore a variety of different cultures and cuisines, as well as provide different options to those who go often.

“It’s nice if you’re here with a group because then there’s something for everyone,” said Janelle, a customer who chose to not share her last name. “It’s always nice to have options and places you want to come back and try. I feel like the hard thing is that there are too many things and I can’t eat all the things that I want to eat because I’m already full.”

Janelle came from Seattle to Los Angeles with her husband for his business trip. Before this trip, she had gone to Grand Central Market once when she had visited a couple years earlier. That earlier trip, she had enjoyed tacos, but decided to try something else this time with a breakfast sandwich from the restaurant Eggslut.

“It was delicious, and I heard that I got lucky, because normally there is a thirty person line and this time there was a five person line,” Janelle said.

Grand Central Market is a place where people are able to remember their experiences of trying new foods, exploring and opening themselves to new cuisines and meeting people with their own stories and experiences. It is a place of community.

“It’s so unique,” Janelle said. “I feel like you don’t find spaces like these with different options and so many different cultures and cuisines in one place.”