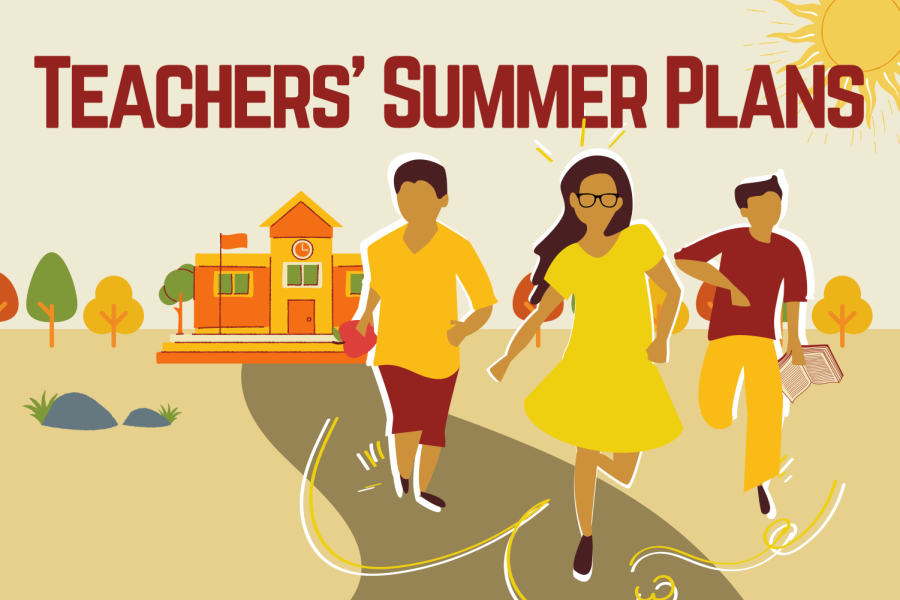 Wayland High School teachers share their summer plans. For many WHS teachers, summer vacation is a great time to relax and pursue hobbies. “It’s a good chance to do things that we [teachers] love and that recharge and prepare us for coming back and starting [the school year] again,” WHS Fine Arts director Susan Memoli said.

For younger children, one common misconception is that teachers live at school. Students tend to think that teachers’ lives revolve around their classrooms and much like how children forget about Santa Claus after the holidays, teachers only exist to them from September to June. However, teachers have interests outside of school too, and summer is a nice chance for them to explore various recreational activities.

The individuality of Wayland High School’s staff shines through in their passions outside of the classroom. Teachers spend their free time each summer developing a wide variety of hobbies that might surprise students.

French teacher by school year, sewer by summer, Sara Langelier, plans to use her free time to sew and teach others how to as well. While students are aware of Langelier’s interest in this hobby because she helps run the sewing club at WHS, it isn’t a common topic of conversation during French class.

“[During class], I try not to talk about [sewing] too much because I don’t want to annoy [my students],” Langelier said. “But some of them know, so a lot of times they’ll ask me if I made the thing I’m wearing, and they usually are pretty interested, which is sweet.”

Her passion for sewing goes back to when she was living in New York City, and not very happy with her office job. She decided to sign up for an art class, where she had her first experience with sewing.

“I’ve always loved the arts so much,” Langelier said. “[When I was living] in New York, the best fabric stores were right there at my fingertips, and I fell in love with [sewing] at that point.”

Langelier hopes to share that love for sewing with others over the summer. She plans to sew with friends and help others get their first taste of the activity. While Langelier hasn’t run a sewing class in the past, she has experience with connecting with people through sewing during the club she created at WHS.

“I think when we are doing our craft together, we have our guard down and are just relaxing and doing something that’s enjoyable,” Langelier said. “The kids who [attend sewing club] really want to learn [about sewing] and it’s not because of a grade. [Sewing club] has nothing to do with the academic subjects, it’s just for fun and the kids come because they want to be there.”

While wellness teacher and football coach Scott Parseghian teaches students fitness year round, summer vacation is his chance to work on his own personal health. One of his favorite ways to stay in shape over the summer is by participating in all sorts of water sports in New Hampshire.

“I love being on a boat and being active,” Parseghian said. “I’m not one of those people who can go to the beach and lie on the beach or the dock all day. I’ve got to be busy, so I love being on my boat and doing nothing but water sports all day.”

When Parseghian isn’t on the lake, he’s back in at WHS coaching flag football to kids in second through eighth grade. He and history teacher Sean Chase have been running the flag football camp for over a decade, and they feel that it helps them connect with the community.

“It’s a great thing to do for the community [because] parents are looking for [activities] for their kids to do during the summer so they’re not sitting home all day playing video games,” Parseghian said. “The kids and parents love it.”

The camp has allowed Parseghian and Chase to get to know the elementary and middle school students before they reach high school. This allows them to get a perspective of who will potentially be joining the WHS football team, and train the students to become better players.

“[The best part of the camp is] getting to know [the kids] and then having them in high school,” Parseghian said. “I joke that I’ve known [the seniors] since second grade because they’ve been coming to the camp that long. [Many students we taught in elementary and middle school] are now counselors at the camp, so it’s gone full circle.”

Similar to Parseghian, summer is a time for K-12 Director of Fine Arts Susan Memoli to continue working with students in their respective fields of interest. For one week during the summer, Memoli will continue working in the music field by conducting for the Rivers Youth Orchestra camp.

“Being a music teacher, it’s not really your job, it’s kind of who you are,” Memoli said. “I can’t imagine not doing it. Even though [my summer job] is the same thing as what I do [during the school year], there’s such a shift in the way that it feels because in the summer when I do the orchestra camp, it’s with younger kids. It reminds me of the challenges at that level.”

In addition to conducting at the orchestra camp, Memoli will also be traveling to Europe with around 130 students for three weeks to be a part of the American Music Abroad program. During those three weeks, the student musicians will have the opportunity to perform and share their music across the world, interact with musicians from different schools and tour Europe.

“[The trip] is just really to have communities come together and enjoy our music,” Memoli said. “In Europe, they’re very band heavy. It’s very typical to have a community band and even these tiny towns will have an amazing band hall. But it’s very unusual that they will have orchestras or just kind of groups at the level that our students are at because [band music] tends to be their music education system. It’s just different.”

Although the students partaking in the Europe trip come from different countries and communities, the trip gives them something to bond and connect over. By connecting with others through a common interest, it gives the musicians a unique opportunity to learn about each others’ diverse backgrounds.

“[My favorite part of the trip] is the unbelievable bonus of experiencing different cultures,” Memoli said. “[I love] to spread the love of music and share that with people in different countries.”

Despite the fact that many WHS teachers have packed summers full of part-time jobs and hobbies, it is also important for them to relax and take the time to pursue their interests outside of school.

“Summer is just the fastest, most wonderful eight weeks of the year,” Memoli said. “It’s a good chance to do things that we [teachers] love and that recharge and prepare us for coming back and starting [the school year] again.”