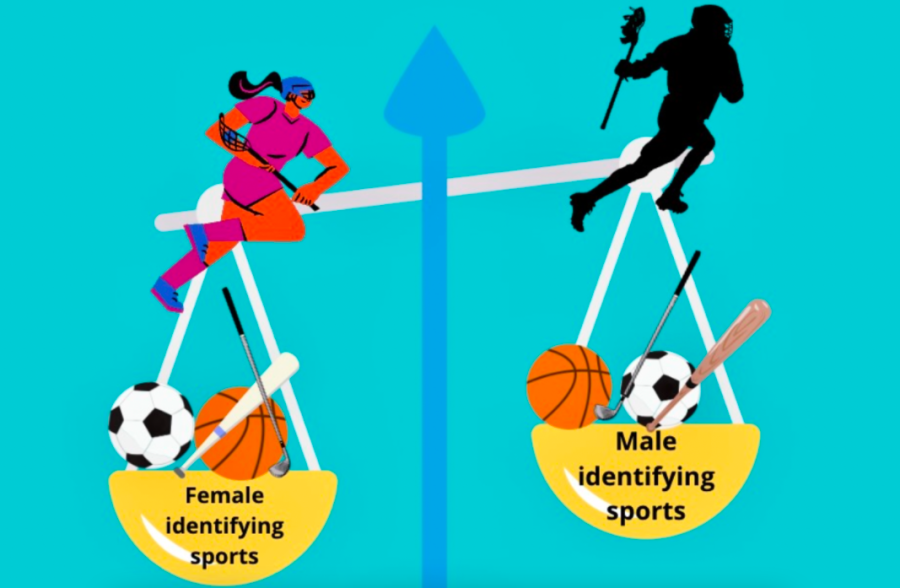 I love writing about sports, especially about the social justice and inequalities within female-identifying sports. All of this falls under the greater umbrella of Title IX, which commonly falls into the cracks. The athletic element of Title IX is not discussed enough. If it wasn’t for my interest in sportswriting, I doubt that I would even know what Title IX really is. That’s frightening.

Don’t get me wrong, Title IX has allowed for advancements in school-based sports. Before Title IX, established in the 1971-1972 school year, girls made up only 7% of high school athletes within the country. In the 2018-2019 school year, 43% of all high school players were females, a great increase. But, are boys and girls sports at the high school level and collegiate level really treated equally? No, not even close.

Actions speak louder than words. Sometimes females only get certain bits or pieces of what we deserve. Title IX directly does this for female-identifying athletes. The fine print is supportive, but the delivery is not executed. Title IX can meet these equal requirements for both males and females through equal equipment and supplies, publicity, and most importantly, locker rooms and training facilities. Title IX “prohibits discrimination on the basis of sex in education programs receiving Federal financial assistance,” yet this promise is not always kept.

Nothing sums up failures of Title IX in collegiate athletics more than the 2021 Female March Madness Tournament. The differences in treatment of male athletes versus female athletes at the national basketball tournament were infuriating. The NCAA preached equality for talented collegiate female athletes, yet denied female-identifying athletes equal facilities to their male counterparts.

Sedona Prince, a center for the Oregon Ducks at the University of Oregon and a popular creator on Tik Tok, sparked a Title IX debate by posting a video highlighting the differences in facilities between the men’s tournament and the female’s tournament. While the training facilities in the male tournament were supplied with lavish, new rooms full of barbells, benches and heavy plates, the females were left to work with a single stack of small-weight dumbbells and a few yoga mats. It’s ironic how those like the NCAA who preach equality between male and female sports are also the ones growing the division. This behavior sends a message that female athletes cannot trust anyone, especially an organization that is required to best serve the interests of their athletes.

Despite President of the NCAA Mark Emmert’s statement that “this is not something that should have happened and will never happen again,” this will not be the last example of sex-based discrimination in sports. Educating ourselves about Title IX and understanding everything it has to offer, can be one step closer to solidifying gender equality in sports beyond just at a superficial level.

When interviewing some of my peers for our video on students’ favorite female athletes, I learned that we know hardly anything about female-identifying athletes. Yes, we got the expected response of Serena Williams and Simone Biles, but I was horrified at how little attention female athletes receive. This really didn’t resonate with me until several peers said that they needed a few minutes to think of a female athlete, just one female athlete—they knew. And, some couldn’t think of one at all, which is disheartening to say the least.

Now, where do you come into play? Fully enacting Title IX must involve a cultural shift in how we perceive sports. And, it must begin with each of us.

The rest will come. Title IX in athletics will not be accomplished completely until there are change makers who fix these injustices. And, I am confident we will eventually get there.