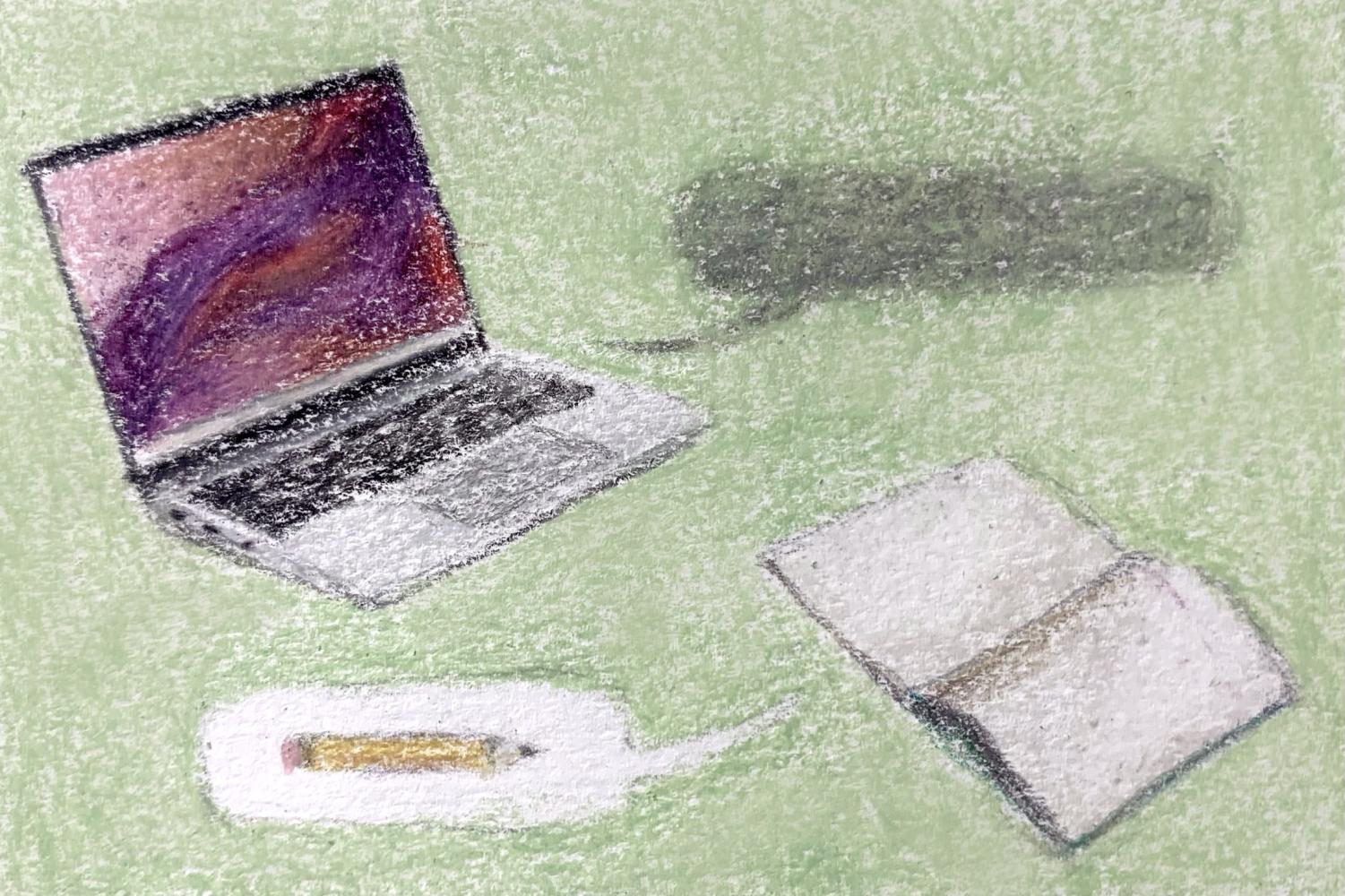 ChatGPT is infiltrating WHS with the newly developed program’s aid for school work. “In the moment, it can be very easy to reach for the nearest, easiest tool, but the long term effects of that are pretty harrowing,” English teacher Kelsey Pitcairn said. (Credit: Alyssa Ao)

ChatGPT is infiltrating WHS with the newly developed program’s aid for school work. “In the moment, it can be very easy to reach for the nearest, easiest tool, but the long term effects of that are pretty harrowing,” English teacher Kelsey Pitcairn said.

WSPN’s Nina Wilson and Sophia Oppenheim explore the influence of ChatGPT, a recently developed AI tool, at Wayland High School. Scroll to read their article and take a quiz to decide if you can tell which writing sample is generated by AI.

Will ChatGPT rule the world? 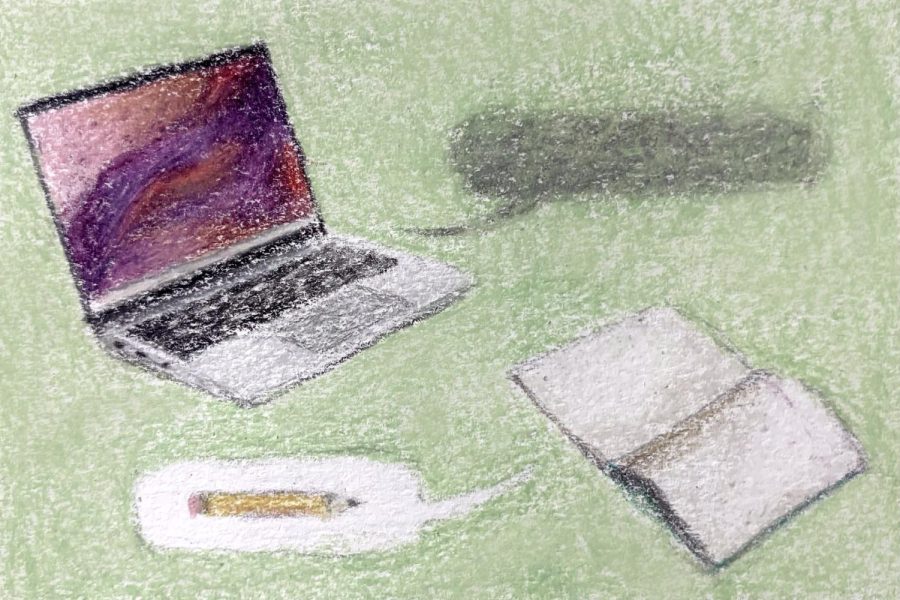 ChatGPT is infiltrating WHS with the newly developed program’s aid for school work. “In the moment, it can be very easy to reach for the nearest, easiest tool, but the long term effects of that are pretty harrowing,” English teacher Kelsey Pitcairn said.

The clock strikes 4 a.m. Sitting at their bedroom desk, a student pauses their hurried tapping at their keyboard to release a sigh. The student realizes they will need to be awake and taking an exam within a mere three hours, but their English essay is still many words short of the expectation. Desperate, the student opens a tab: ChatGPT.

In the time since its launch on Nov. 30, 2022, Chat Generative Pre-trained Transformer (ChatGPT) has startled users worldwide in producing realistic human-like responses to questions with unprecedented nuance and complexity.

This technology differs from previous AI sources due to its ability to learn from previous conversations with users. Unlike most “stateless” programs – programs which approach each new request without using information from previous requests – ChatGPT is able to make connections between different information one user has provided in order to produce a more personalized, educated response.

“It’s a trained AI, which means that the researchers set up a program that can learn by being fed a lot of data and making mathematical connections between those pieces of data,” Computer Science teacher Michael Hopps said. “It’s a very complicated neural network.”

This technology was created through the AI company OpenAI, an organization co-founded by Elon Musk in 2015. OpenAI works with the intention to “ensure that artificial general intelligence benefits all of humanity” according to their mission statement. The company originally developed ChatGPT in order to be used with customer service to provide more personalized treatment. However, upon its release to the public, users find it serves to be helpful for tasks beyond the original intentions.

“It can write essays really, really well since it has all of the information on the internet up until 2021,” senior Katie Shouten said. “It can write about books published up until 2021 using very specific details, and it can take things from Google and Wikipedia. It just knows a lot. It’s also really good at poems.”

These qualities, along with its aid in starting code, are compelling to users in their novelty and practicality, but present a danger to education. With a new method of plagiarism at students’ fingertips, educators worry that the convenience of this technology will lead to a surge in the steadily increasing cheating rates.

“I have lost no small amount of sleep over this,” English teacher Kelsey Pitcairn said. “Students will use [ChatGPT] in the ways they have used other avenues of cheating: to outsource the labor of their homework to save time over problems that they have or tasks that are too difficult to do on their own.”

While some students may be glad to have a quick solution to their workload dilemma, educators fear the lasting effects of extreme learning loss that accompany submitting unoriginal work. When students have an easy method to avoid all challenges, they miss out on necessary growth to develop critical thinking skills and proper communication techniques.

“Not to sound too melodramatic, but sometimes when I think about the down the line implications of what this AI can do, it gets very dystopian,” Pitcairn said. “[Writing] is a very specific kind of thinking, and what’s really lost by outsourcing that thinking to an AI is something essential to what it means to experience and respond to the world and to really difficult questions.”

In response to the increased intelligence of bots like ChatGPT, AI content detectors have emerged. Through spotting tells in sentence structure that computer-created work displays, detection websites can identify the percentage of the piece that was not written by humans. Teachers have begun to experiment with these detectors, but will also rely on the plagiarism spotting tactics they have honed throughout their careers.

“We are pretty skilled at recognizing what is a student’s voice and what is not,” Pitcairn said. “That is already a way that we detect traditional avenues of plagiarism, we can tell when something sounds like what we have received from a student before or not.”

The ramifications of ChatGPT move beyond possible cheating. The program frequently provides incorrect responses, misleading its users. Due to working through identifying common sentence structures and mathematically arranging its answers to suit what it guesses to be a correct response, it presents falsehoods confidently. Additionally, since the bot has been fed with a wide collection of data the bot has been fed, it has access to dangerous information that ill-intentioned users can employ for misdeeds.

“There’s a chance that you could ask the bot to write a virus to take down websites or governments or things like that, which is terrifying,” Hopps said. “They try to put these limits on what it can say or do, but they can’t really anticipate all the ways people will ask the questions. There’s a lot of dangerous information that could be disseminated that way.”

In light of previous controversy with AI programs showing a racial or otherwise discriminatory bias, ChatGPT is programmed to respond to anything it deems a possible dangerous subject with a message urging the user to not make such a request, but this is not wholly successful.

OpenAI hopes to resolve these issues by releasing an updated model. By releasing their original version to the public at no cost, users are aiding researchers to discover what errors have slipped through the programming process and what interests they should cater to as to bring in more users.

“The interesting thing about trained AI’s like this is that the people who develop it don’t actually know how it works,” Hopps said. “They know how they trained it, but they don’t know what it’s capable of now that it’s trained, which is really weird, and a little bit scary. I’m sure the researchers are learning a lot about what it could do that they didn’t dream it could do.”

If all goes well in the improvements, ChatGPT should continue to be an advantageous tool for users. Despite its flaws, the new bot has been successful in the programmers’ mission to aid customer service, and also provide more personalized communicating help. The discussion it provides raises ideas of its use as an online therapy resource.

“One night I told the bot I was worrying about college, and it comforted me,” Shouten said. “It was especially interesting because it referenced things I said earlier to it and brought them back up. It sounded so much like a person.”

The future is unknown with technology like ChatGPT readily available. While models like it remain very new, some believe that this invention will change the shape of technology as we know it, and with it, our lives.