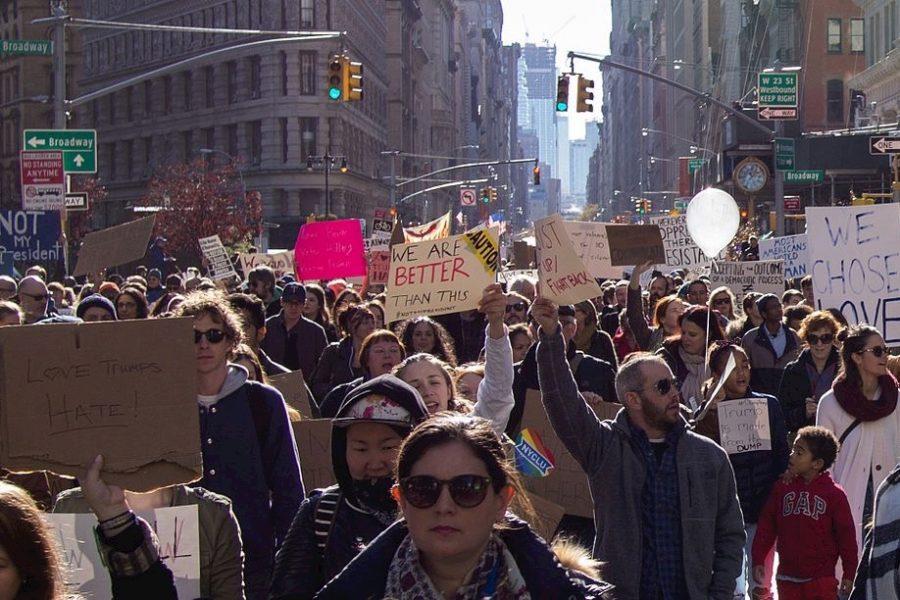 Many Americans were outraged to find that reality TV star Donald Trump had won the 2016 presidential election. Many took a stand against the outcome by attending rallies. Juniors Jen Curran, Savannah Salitsky and Ella Johnson were among them. Here are their stories.

Can you talk about the rally you attended?

We actually didn’t plan to attend the rally; we sort of inadvertently ended up there because we were going to be in the city [New York City] that weekend anyway and just happened to be in the exact area the protesters were marching. All the roads were closed off, there were cops everywhere, and they didn’t really know what to do about it because there were 100,000 people marching through the streets with signs and yelling. It wasn’t angrily, it wasn’t a violent protest, but it was definitely unhappy people. [The protesters] had a bunch of signs and it was right in front of Trump tower, where he was staying that weekend. They completely blockaded the entire road. So it was really crazy because all the traffic stopped. My dad and I couldn’t [drive] through for three hours. We just left our car running in the middle of the street and walked around and went to get dinner — which never ever happens in New York. When we got back, the car was still standing in the middle of the street. No one had moved an inch in three hours. We stood in the protest, and I walked around and held people’s signs. There were people interviewing other people, and there were all these CBS vans everywhere. I think the big deal about this protest was that so many different people participated. It wasn’t just like, “Trump is racist so minority races will be there,” it wasn’t just women or LGBTQ people, it was literally everyone because Trump targets so many different groups of people. He targets everyone that isn’t exactly like him, so it was pretty much every group of people besides rich straight white men, and a lot of them were still protesting.

What was the most memorable thing that you experienced or saw during the event?

I think it was very memorable when I saw this one Trump supporter who was there, and he was in the midst of all of these hundreds of thousands of people protesting Trump. He had this Donald Trump “Make America Great Again” sign and everybody just went silent and then started chanting “shame, shame, shame!” at the guy until he left. Because it was on Fifth Ave., with all of the fancy stores like Cartier and Tiffany’s and everything, all of the people working in those stores, like no one was going in because no one could get anywhere, so all the people working in the stores just went and stood at the windows and stared down at the streets and waved at people and held up their hands in the love sign to show that they supported it. So that was pretty memorable.

The atmosphere wasn’t silent, the only time it was silent was right before they started chanting “shame, shame, shame!” but it was mostly just determination, I would say. It was a bit of anger and a lot of people refusing to back down in fear. A lot of the signs were talking about how Trump used the fear factor to win over so many people and the electorate. They said that the fear factor would never affect them, and that they would never stop fighting. There were a lot of very clever slogans on the signs that expressed that idea.

Tell me about the protest you attended.

[The protest] was really nice. It was in the Boston Commons, and there were a few hundred people there, I would say. People would go up in the middle and tell a story.

Why did you go to the protest?

I went because I was tired of feeling useless and helpless because I can’t vote or anything like that. It made me feel like I was doing something to combat this commotion.

It was the Saturday after the election.

The atmosphere was very peaceful and just overall wholesome.

What’s something about it that you will remember for a long time?

I think the most memorable thing was just how open-minded and supportive everyone was there. No one knew [everyone] there obviously, and everyone was just like “I love you,” and it was like “you don’t know that person there but all right.”

Did you participate in any way [in the protest]?

I didn’t have a sign, but I cheered. I didn’t speak because I was scared.

Why did you go to the protest?

I went to one, I think, more because it was an expression of not only the anti-Trump thing, but it was kind of a bundle of all of the issues I had with the campaign he ran. I left feeling much more confident that we were going to get stuff done, so yay.

This was the Saturday after the election. I went with [Salitsky].

The atmosphere was very positive. I expected it to be a little more aggressive, but everyone was really pumped up, and everyone was cheering. There was a lot of support from different people.

Was there anything that made a big impact on you or struck you as particularly memorable?

The most memorable thing was when this one [boy] went up and said that [he] was sixteen or something and she was like, “I don’t feel comfortable in my house, and I don’t feel comfortable in this world now that Donald Trump is president. I just wanted to say this to this group because this group of people is so loving,” and then [he] came out as a transgender man. It was unbelievable. I definitely teared up and was like wow, it was really intense. I definitely won’t forget that for a long time….

How did you participate in the protest?

I cheered and clapped and yelled out support, but I didn’t go onstage and speak.

Would you go to another protest? If so, why?

I definitely would love to go to another one. I think that the protests are to, I guess, show people that we are not going to back down and that we are going to fight for minorities and [for] groups that are being targeted by Mike Pence, Trump and the administration that he’s currently putting together. I think that it’s also to show support for people and show that they have a safe haven if they need one. I think that if people do keep protesting and speaking out against him, then it’s going to be a lot harder for him to do things that would impact minorities.