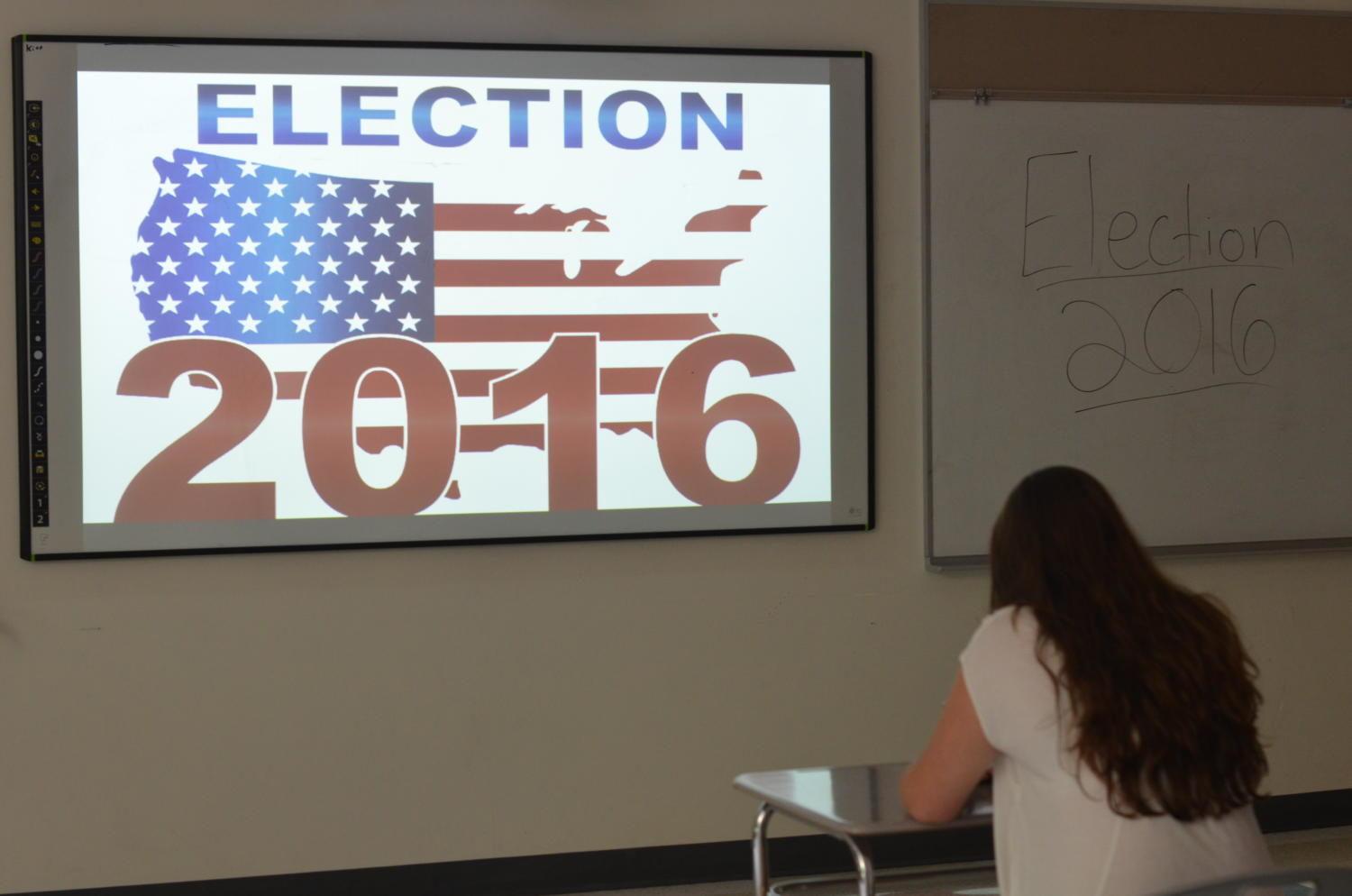 Photo Illustration: A student sits at her desk as her class discusses the 2016 election.

Although the presidential election of 2016 is long over, the ripples it sent out still seem to reverberate throughout our daily lives. Described by many as “unexpected,” or “shocking,” the race has been credited with creating the largest shockwave in the political spectrum of the twenty-first century, an earthquake that has, among other things, completely polarized the political climate. In an alarming display of disruptive selection, the election morphed Democrats into strict liberals, Republicans into hardcore conservatives, leaving the moderate middle zone a barren, near-abandoned no man’s land.

However, while this bitter exacerbation of the political divide is acknowledged widely as the primary effect of the election, there are many others that are much more subtle. While one may not expect it, these days, someone’s political opinions don’t just affect how they vote – even small things, like the way people talk to them and how they are seen as a person, can be altered by one’s political views.

To recent WHS graduate and member of the class of 2017 Jenia Brewington, this assertion certainly holds true.

“Before the election, it wasn’t necessarily like that,” Brewington said. “[But nowadays] I think it definitely could be [a factor that people would judge you for]. I feel like if you don’t know it, you won’t judge the person, but if you do, it definitely comes into your mind. If it doesn’t come up, then you would look at that person like you normally would. But as soon as you know their political view, it sort of just changes that.”

Brewington is not the only one who agrees that a person’s political beliefs affect the way other people judge that person. Senior Sam Wolff, who has had personal experiences with this issue, also believes in this idea.

“I think it definitely does with everybody. I can’t say truthfully that it doesn’t happen with me, but I try not to,” Wolff said. “[There was this] conservative kid I met at camp who I talked to a lot, and I was like, ‘wow, this guy has some really radical views, some of the stuff he said was just really out there and immoral.’”

Reflecting back, Wolff concluded that this affected his judgment of the conservative person he met at camp. In addition, Wolff mentioned that there were many instances online as well.

“I feel like for most people, political issues are very intertwined in their emotions,” he said. “We’ve all seen those people on Facebook who are like, ‘if you support Trump, do me a favor and remove me as your friend.’”

While Wolff could relate to judging someone based on their political opinion, he did conclude that saying something like that may be overboard.

WHS senior Lucas Rostler also agreed that someone’s political views became a judging factor in how other people saw them.

“I would say nowadays absolutely,” Rostler said. “I think it somewhat always has, since the beginning, but I think now more than ever probably.” However, Rostler also believes that this kind of judgement is reasonable.

According to WHS Principal Allyson Mizoguchi, there has been a change in the importance of one’s political opinions compared to before the election and all the division it has brought to our country.

“Given the reactions that I have seen and heard when people wear a Trump shirt or a Trump hat or a Trump bumper sticker, there’s something else to that now because there are such strong opinions about our president and this new presidency,” Mizoguchi said. “I think it’s situational. I have family members who are across the political spectrum. And it matters more now. Because the political climate is so hot, and the issues are so real, and because things are shifting so drastically, and there is such symbolism and emotion attached to these issues now.”

“I think that right now, more is attached to someone’s political leanings because there are so many social issues and so many kinds of issues that are attached to that,” Mizoguchi said.

It seems that the majority of students at Wayland High School believe that the way a student votes, or the way they will vote when they are older, affects the way others view them.