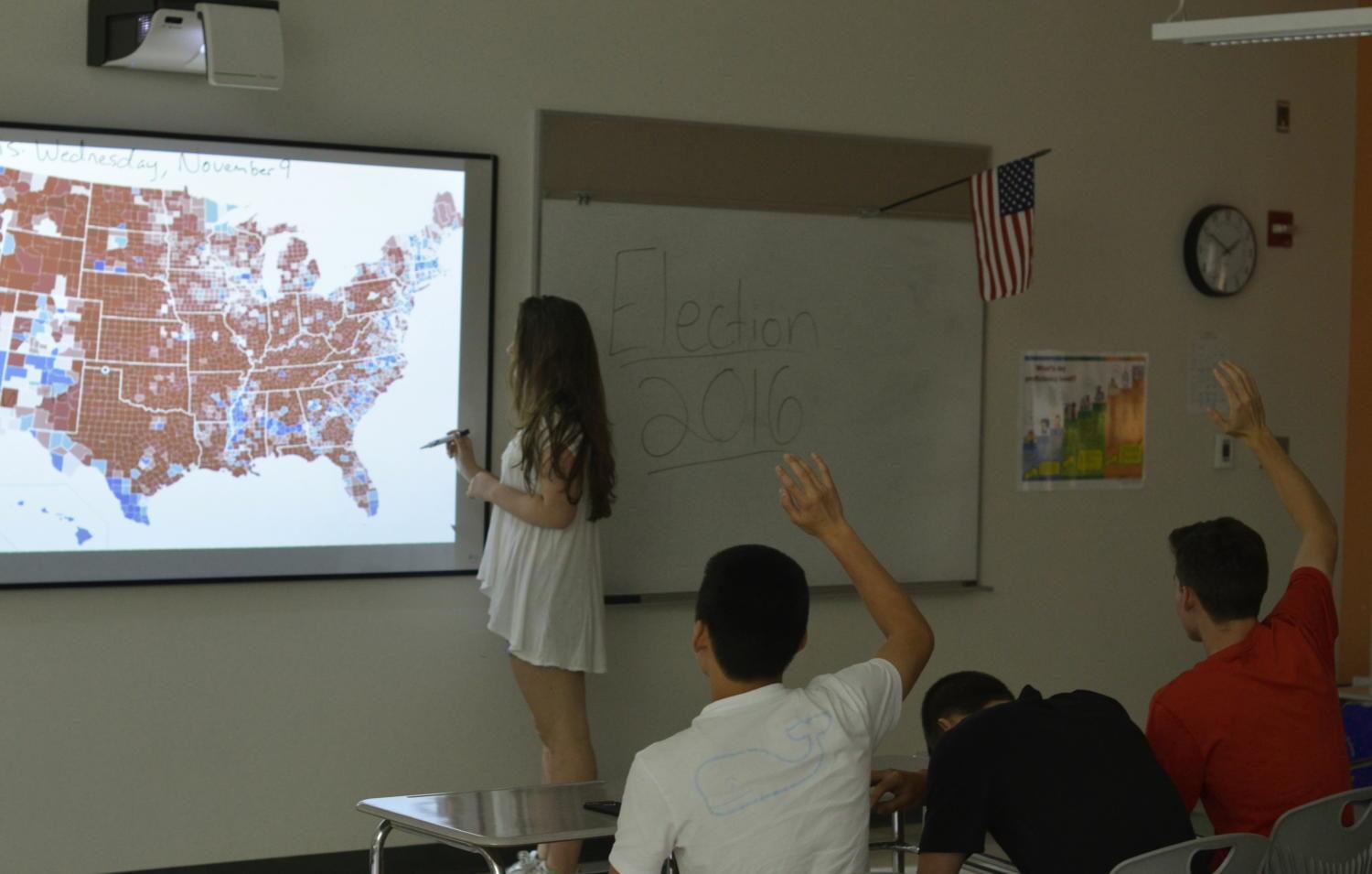 Photo Illustration: Two students raise their hands while the other puts his head in his arms as they listen to a teacher lecturing on the election.

On the eve of Nov. 4, 2016, the world was shaken by a momentous presidential election. Around the country, millions of people reacted with outbursts of emotion, both of grief and of joy, of celebration and of anger.

Senior Yaniv Goren, who identifies as a Democrat, believes that since the election, the political climate has become much more polarized.

Goren also believes that the political climate in WHS is much more liberal, even before the election as well.

“Wayland is probably much less liberal than other parts of Massachusetts,” Goren said, “but nonetheless, it is more liberal than most of America.”

However, Goren does think that the climate represents the political climate in the rest of the state.

“I think a lot of people lean left,” Goren said, “but there are also a lot of moderates, or people that lean right. It’s fairly representative of Massachusetts for sure.”

However, according to senior Sam Wolff, a Democrat, the political climate has just shifted mainly in one direction – to the left, especially in Wayland High School, where he believed had already been mainly liberal.

“[The political climate here is] definitely liberal,” Rostler said. “Most people did not want Trump, and the day after the election it was like someone that went to this high school died. That’s just Massachusetts. It’s just liberal, and there’s no exception at Wayland High School.”

However, Rostler also believes that the political climate here at WHS is more than just liberal – it’s exclusively liberal, and many minority views, like conservative ideas, are not welcome in the community.

“I don’t think [the climate is welcoming to minority views],” Rostler said. “I think just in general, most communities aren’t going to be open to any viewpoint, political or something else, that’s the minority.”

Junior Michael Maurer, who also leans more towards the democratic side, believes that the election has both shifted the balance towards the liberals and political climate.

“I think it has created more Democrats than before, more people leaning towards that side because of a lot of things our president has said and done,” Maurer said. “But I also think it really has created a lot more separation between the two parties. Democrats tend to be very anti-everything Republican and the Republicans are very anti-Democrat, and I think it’s kind of created more separation than anything now.”

However, Maurer believes that political climate is fair to both sides and that there is representation from both sides in the school.

To recent class of 2017 graduate Jenia Brewington, who is also a self-proclaimed Democrat, the political climate is more liberal. For her, a big part of it is due to the fact that most of the staff at the high school are known to be more liberal.

Although Brewington doesn’t believe that the minority views are not welcome in the community, she does think it is harder for them to express their beliefs.

“I definitely think that if I [were] somebody who had conservative views, I wouldn’t feel comfortable speaking up,” Brewington said. “Just because I know [the majority] would be opposed to [what I would say] and [people would] probably judge me about it.”

English teacher Sara Snow also believes that the political climate at the high school is very liberal. However, according to Snow, the school is very welcoming and open to other ideas as well.

However, Snow is unsure whether the students in the WHS community genuinely tally more on the liberal side than on the conservative side.

“I don’t know what the majority of the students think, because I often think students reflect back to you what you want them to be as teachers,” Snow said. “If you ask me or my students, ‘is Ms. Snow a Democrat or Republican,’ I think they would say Democrat. Therefore, they are going to subconsciously, or consciously, reflect back my views to me, to gain approval or whatever. That’s just sort of the nature of the student-teacher relationship. So, I’m not sure what they are inside, or what they really think [outside of school].”

WHS Principal Allyson Mizoguchi also believes that the political climate has become more polarized or has at least could have been.

“I think that there is the potential for polarization,” Mizoguchi said, “Because we have a president who, whatever people’s opinions about him or his policies, I think he sometimes delivers information in a way that can be jarring to some or that doesn’t really leave a lot of room for discussion and reaction.”

However, Mizoguchi also believes that this shift in the political climate brings positive effects to the scene as well.

“I would say I can’t remember a time in my role as a teacher or working at Wayland High School, that the political environment hasn’t felt as energized and as challenging and dynamic than it does right now,” Mizoguchi said. “I would say in the months leading up to the election, and in the months since the election, I have sensed, and know about, a heightened political energy here at the high school.”

“I think in many ways that’s good because it’s in response to real world events and what’s happening right now, and part of our mission here at the high school is to make sure we’re connected to the world,” Mizoguchi said. “[We should] be aware that we’re not living in a little bubble.”