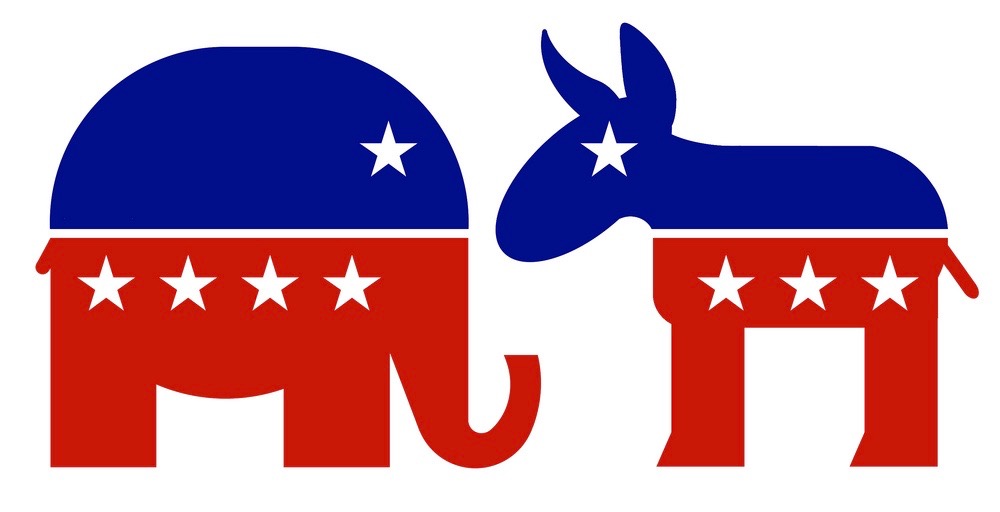 Pictured above are the Democrat and Republican logos. Although the 2016 election has long come and gone, the election’s impact on WHS’ political climate cannot be understated. In an in-depth feature, WSPN reporters Andrew D’Amico and Nathan Zhao explore students’ reactions to the political climate at WHS.

In the weeks and months following the 2016 presidential election, teachers and students discussed the election across all subjects and all classes. While some students participate willingly in all class discussions, others might feel left out. WSPN spoke to self-identifying conservatives regarding the school’s political climate.

Some students feel that those who don’t share the same views are often looked down upon or shut down when speaking.

Recent WHS graduate and member of the class of 2017 Tyler Johnsen feels that the political climate leans more toward Democrats.

“The majority political standpoint in the high school is liberal-sided,” Johnsen said. “I would definitely say conservatives are very much in the minority and get singled out quite frequently.”

“There are many people in this school who think we should be accepting of gender-fluid people,” Wang said. “Of course I’ll accept them, but it’s not like I’ll agree with them.”

A WHS class of 2017 graduate who preferred not to be named due to fear of reprisal from their views said they generally feel comfortable expressing only some of their opinions.

Johnsen believes that Trump-supporting students are often unfairly labeled as racists or misogynists.

“[Students] didn’t even consider that they may have just been voting for him for his economic policies. I think it was a refusal to see the other side of the argument. I think that when those students were being shut down and told that their views were wrong that’s when they were alienated further, and that’s why things became much more hostile between opposing parties.”

According to member of WHS’ class of 2017 Max Adelman, classroom discussions often end up leaning left because of the natural influence that a teacher has in a classroom.

Both Wang and the anonymous student detailed their experiences in various WHS classes.

“[We were having] a discussion over gender-neutral bathrooms. Some kids and I were saying, ‘Hey, why do we need this? It’s going to be counter-intuitive, if anything.’ We had all these arguments,” Wang said. “Then, some other students said, ‘shut up, Andy, you don’t know what you’re talking about. I wanted to say ‘calm down; this is a friendly discussion,’ but the teacher shut me down.”

Another member of Wang’s class, who chose to remain anonymous, agreed with Wang’s assessment of the situation.

“I don’t think [the teacher] supported [Wang’s saying of shut up], but [they] definitely did disagree with Wang,” they said.

This anonymous student also concurred with Wang’s statement that the teacher “shut him down.”

“I would say the most eerie thing with the election was during advisory. My advisory teacher was talking about how they discovered that one of their friends was a Trump supporter,” the first anonymous student said. “It was like they didn’t know that person or if they were a completely different person than my teacher thought they were. I began thinking, what if that advisory teacher discovered I had conservative views and suddenly [treated] me very differently? I think that’s partly why I hide my views from most people.”

Another issue that was raised this past fall was how teachers and students around the school reacted to the results of the election.

“I think [the reactions] were very biased and borderline inappropriate because you can’t just break out crying in the middle of class because you didn’t get what you wanted,” Adelman said. “Sure there was a negative stigma with Trump, but you have to remember that you’re in a school, with kids who are very easily persuaded. Some of these teachers are role models.”

On the other hand, junior Christopher Maietta, who identifies as a conservative, felt that the reactions post-election were fair.

“It was professionally handled [by WHS staff], and I saw nothing wrong with it,” Maietta said.

Wang described the impact of the election on the ongoing debate regarding major political issues.

“[In particular], I think gender and LGBT issues were profoundly impacted by the 2016 election and Trump. I don’t necessarily agree with the way Trump is saying things; he was kind of blunt by saying these people don’t exist or ‘nasty woman’ or ‘grab her by the you-know-what,’” Wang said. “But, after hearing Trump’s comments and after Trump became elected, [some students at this school] said, ‘Trump got elected, now you’re having people who think it’s OK to insult us more,’ which just escalates the situation.”

In the realm of academics, Adelman and Maietta felt that grades were not affected by political viewpoints. Johnsen, however, expressed that occasionally he “slants” his writing, in order for a teacher to agree with him more and perhaps receive a better grade on assignments.

The first anonymous student noted that if they wrote such an essay from the heart, they may receive a lower grade.

“I’ve gotten surprisingly high grades for expressing an opinion that a conservative would be most likely to say, but it’s impossible to tell 100 percent because we don’t know what goes into the grading process,” they said. “But, I’ve had a lot of experiences when I’ve gotten a much worse grade [with a conservative opinion] than any of my other [papers].”

“I know other students for whom that’s been the experience as well. I’ve been enticed by good grades to [write a liberal opinion],” they said. “At the same time, I also think it’s not good for all of the liberal students at this school because, if you think about it, they aren’t being exposed to the other side [of the political spectrum]. One of the things that I think education should be for is expressing different perspectives.”

When it comes to creating a climate in the classroom in which students feel comfortable expressing their ideas, some feel that there is still much to be done.

Johnsen cites a specific incident in which a Trump supporter was singled out in a classroom by another student.

“There was one particular incident, where a student in our grade (senior), was a Trump supporter and someone asked them, ‘What did you think of the election?’ and they said ‘oh, it was okay.’ In response, some other person in our class started swearing at them and screaming at them in the middle of class, and not much was done to curb that,” Johnsen said.

Students expressed that it is essential to be able to listen to each others’ ideas in the classroom.

“I think it all just comes down to people learning how to agree to disagree and knowing how to conduct a civil discussion about politics and being respectful about each other’s views,” Johnsen said. “Not just trying to prove oneself right over another person. Everyone should be allowed to voice how they feel as long as it’s respectful and not hurtful or antagonistic.”

“The first step is with teachers,” Adelman said. “I guess just to be more open and have civil discussions. We’re on a slippery slope with the whole election and our location.”

It was a common belief among the students that political discrepancies are most often magnified in the history classroom, and occasionally during English classes.

“Teachers start it, [but] then students feel like they can keep it going because the teachers won’t really do anything about it,” they said.

In response to certain students claims that they feel alienated in the classroom, history department head Kevin Delaney said that “[t]here are likely instances when teachers have drawn the line on statements that violate the norms of decency and civility, and students instead see them as acts of partisanship.”

“I think most reasonable people would agree that the president has said a lot of things over the past 18 months that, if stated in a schoolhouse, would result in disciplinary measures,” Delaney said. “As such, it’s our responsibility to take a stand when anyone, even the president, goes too far on issues related to sexual harassment, thuggery, intolerance and so on.”

“I hide my conservative views from a lot of my friends. Some of my friends don’t know that I’m a Republican, and some know that I am one but don’t know all of my views,” the first anonymous student said. “I think that it’s a little bit different when views are being suppressed by students, but they are definitely discouraged, and your social life will probably be harder if you’re outwardly conservative.”

“The implicit assumption is that you are a specific type of person if you’re a conservative. As if conservatives are an alien thing in Wayland,” the first anonymous student said. “I know [conservatives are] uncommon at WHS, but conservatives are still people, and if you discover that your friend has conservative views, it’s not like that friend is a completely different person. You still know them.”

Although there are always clashing views at the high school and around the country, students believe that the recent election may have had a role in amplifying these opposing views.

“The election happened, and I think that polarized things a lot more, but I think those views throughout the country helped make the election especially polarized,” Maietta said.

Despite these opposing views and tension during the election, along with students who believe that their voices aren’t being heard, Johnsen noted that there are teachers who are respectful of all views.

“There are teachers in this school who are incredibly respectful about kids’ views,” Johnsen said. “One of my teachers that I’ve had this year I’m able to talk with quite frequently, and even though we don’t always agree with each other on everything, we’re able to joke about it and we’re able to have very educational discussions.”

However, the first anonymous student noted that the school still has many areas to improve upon.