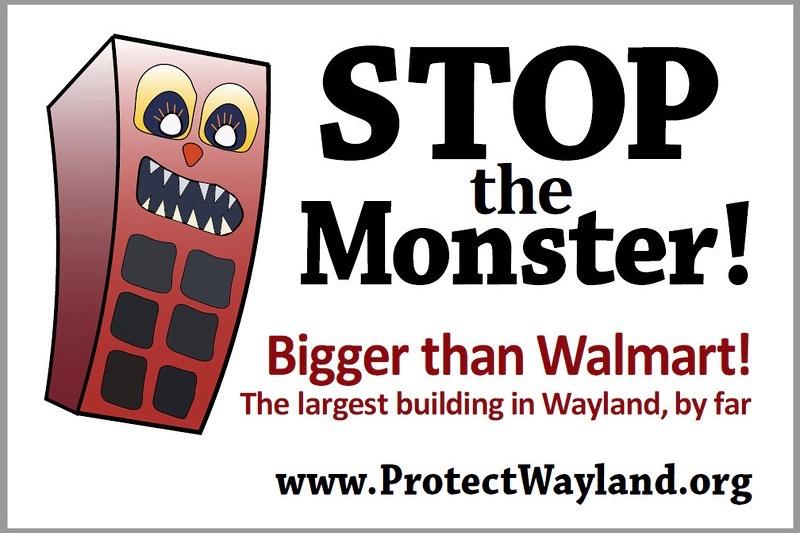 WSPN’s Naomi Lathan and Julia Callini present two sides of the debate over the new apartment complex coming to Wayland.

Stop the Monster: Two sides of the debate

Opinion: For the Monster

A new invasive species has been introduced to Wayland, Mass. “Stop the Monster” signs have grown like weeds in what feels like every yard in town.

What is “the Monster?” It’s an apartment complex of affordable housing. I know, the audacity….

Wayland schools are some of the best in the country, and affordable housing would provide a wider range of students with the opportunity to attend good schools.

Not only would the introduction of affordable housing offer opportunities to more people, it would also improve the experience of those who already live in Wayland. I consider myself a minority in Wayland, not only as a black student in the school system, but also as someone who doesn’t come from a long history of wealth. My mother always worked — something completely normal for most of America, but out of the ordinary for kids in Wayland. People never understood why my mom didn’t have time to cut up 50 oranges for my soccer games because everyone I knew had stay-at-home moms. The inability of my friends to understand something that is so normal to most Americans revealed to me how out of touch many of the people who live here are. The introduction of more affordable housing would make Wayland less isolated.

As plans for the new housing development continue further and further on their path to realization, Wayland residents have found many reasons to be against it. There have been complaints about everything from more traffic to a possible increase in calls to the fire department, but the real issue lies in the effect that the new development would have on the image of our historical town.

The signs in people’s yards don’t read “protect our environment.” The giant red words say “bigger than Walmart.” People fear that it would destroy the small-town feel of Wayland.

When I realized that one of the biggest arguments against a structure that could increase the economic and cultural diversity of this bubble of a town is that it “might make the town look like Framingham,” (a concern voiced by the Protect Wayland coalition) I realized that the residents of Wayland are truly teetering on the line of elitism.

This invasive species has gone too far. It’s time to kill the weed.

Suburban America is growing in size. Whether it be portion sizes, waistlines, or housing, Americans love oversized everything. This includes “The Monster,” a four-story, eighty-nine bedroom apartment complex that would cause severe social, economic and environmental damage to Wayland’s community.

If this monstrosity of a building goes up, the stream of traffic would be endless. Traffic is miserable on the weekend; between The Islamic Center of Boston, Temple Shir Tikvah, The Carriage Houses and Prime 13, it’s already backed up enough in that area, especially on the weekends. Traffic backs up all the way to the Sandy Burr on weekends, and if one hundred more cars are added to the mix, it will only increase the gridlock. This would not only be frustrating to the citizens of Wayland, it would also frustrate anyone who takes Route 20 on a regular basis.

If The Monster’s construction continues, the price and value of houses around The Monster, along with other houses in Wayland, will drop drastically. According to an estimate on the 2016 Wayland annual report, values will decrease as much as five percent over the next five years. Take away five percent from the price of the average house in Wayland, which is $700,100, and houses in that area drop to $665,095; that’s almost a $40,000 decrease. That’s $40,000 away from college, insurance and 401k’s. There are 170 homes on Boston Post Road, where The Monster will be built, and all of them will likely lose value. Homes within a mile of The Monster would retain the majority of their value, but lose some of it due to the new, high-tech development going up in their town.

The water supply in Wayland has been deteriorating for the past decade. To throw another 90 bathrooms, kitchens, washing machines, sprinklers and other water-products into the mix would throw off the entire water system, and possibly create water bans more frequently.

“The Monster” is next to Pinebrook Waterline, which connects to the Great Meadows National Refuge and Sudbury River. The 100+ toilets that will be placed in these buildings will spew over 10,000 gallons of nitrogen-filled sewage a day. It would literally dump crap into our water supply, not to mention the potential runoff it would cause.

The sewage would also run into and affect the wildlife, especially endangered species such as the Wood turtle, the Blue-spotted salamander, and the Copperhead snake, just to name a few. This would affect the ecosystem in ways such as overpopulation of other species, flooding and possibly leading to the extinction of other animals.

If this complex was to go up, it would have an irreversible effect on Wayland and its surrounding communities. We need to stop it before we regret the consequences of this monstrosity.