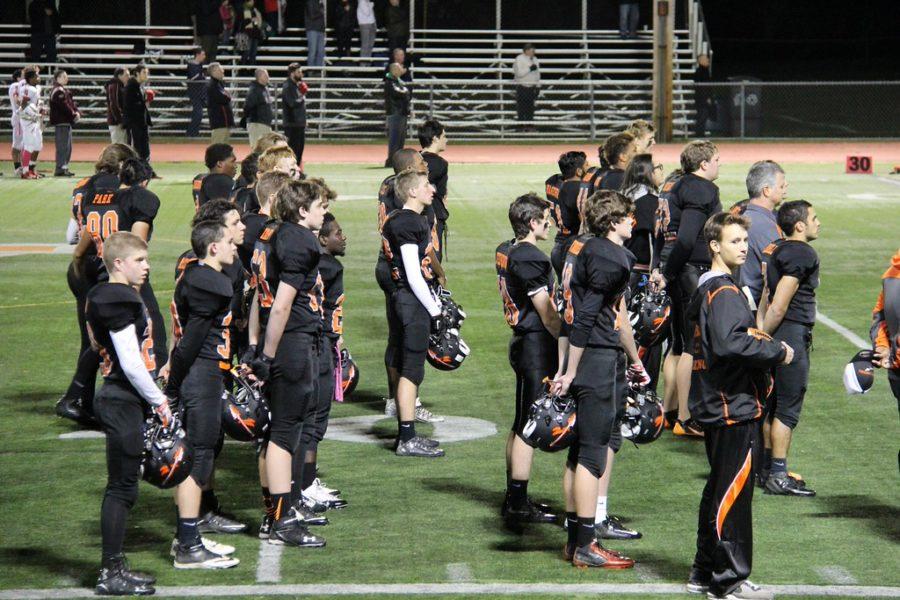 Pictured above is the Wayland varsity football team standing for the National Anthem before a game two years ago. Four students chose to kneel during the anthem this season.

Students stand up for their beliefs by kneeling

“Please rise for our national anthem.” Feet shuffle upon the metal bleachers as students and parents rise to their feet facing the flag. The teenage football players step on the field removing their helmets, eyes toward the flag overlooking the field. Everyone stands to face the flag, humming softly as the pep band bellows out the Star Spangled Banner–everyone, but three Wayland football players, who kneel silently instead. Their hands are placed over their hearts. They’re standing up for what they believe in by staying down.

On Thursday, September 28, three WHS students followed athletes they’d seen in the National Football League kneeling during the national anthem. It was just another game on the road, and Wayland was decked out in white pants, jerseys, and socks. The team was at Boston Latin School, who donned white and purple for the game. The students who knelt were African-American sophomores Shawn Bernier, Kael Bonds, and Kuran Freeman.

“I had a quick discussion with [my teammates] Kael and Kuran about how we should take a knee together for our next game. We were all on board with it,” Bernier said. “Kuran came to me and spoke with me, [and] he said, ‘we both don’t get treated the way we should, we should definitely take this knee.'”

The following Friday, fellow teammate, Franky Gonzalez, who was sidelined with an injury, also knelt with his teammates, making it four kneelers in total.

“We’ve come across teams now that have actually made it a point to line up in unison during the national anthem,” Chase said.

The Wayland athletes stand behind their decision to kneel during the national anthem.

“When you see everyone traditionally standing to basically praise the national anthem, and one day you see a black male or two kneeling, it’s obviously going to be something symbolic regarding those actions that have been taken,” Bernier said. “For me personally, I’ve done it because it shows I have some type of feeling towards the national anthem and it should not be praised for any reason.”

For me personally, I’ve done it because it shows I have some type of feeling towards the national anthem and it should not be praised for any reason.”

The players that knelt– Bernier, Gonzalez, Bonds, and Freeman– all gave their own justifications as to why they felt it necessary to kneel. Bernier stated that he felt guilty for not doing it in games before.

“As a person who’s head of Power Club, I should be doing things like taking a knee because it’s exercising my beliefs in my first amendment right,” Bernier said.

Power Club is a club that talks about current minority issues and events.

Gonzalez said he knelt because he thought he’d convey a message like the players in the NFL.

“There’s a lot of controversy in the NFL and [with] [Donald] Trump,” Gonzalez said. “Players have been doing it as a type of peaceful protest, and it has kind of inspired us to take part in showing that it means something more.”

Freeman said he knelt because he felt the problems that led NFL players to kneel–inequality and mistreatment of African Americans–are evident here at WHS.

The athletes who knelt stand behind their reasoning. However, a survey of 229 WHS students found that the student body doesn’t completely support their motives. 48.9% of students surveyed said they didn’t agree that those who knelt should have. Of those surveyed, 83.6% also said they aligned with a democratic or centrist view.

We just felt like we shouldn’t stand for a country that doesn’t really stand for us.”

“Because of [the First Amendment], I believe that anyone has the right to kneel,” an anonymous student wrote in the survey. “However, it is a complete sign of disrespect to our flag, the anthem, and what it stands for. The students that choose to kneel will argue that the American flag and national anthem represent racism and slavery, which is complete nonsense. Yes, some racism may be present in our country, but that does not make our flag a symbol of racism. The national anthem’s purpose is to honor the soldiers that die fighting for our country, and I believe that it is not to be disrespected by athletes and students that believe it stands for something else.”

Bernier, Bonds, Gonzalez, and Freeman have also had mixed reactions from their teammates.

“Immediately after we took the knee, someone came up to us who was on our team and [said] ‘you guys are only in high school, you don’t need to be doing these things at a high school game, you’re not that important,’” Bernier said.

“Everyone’s been a little stunned by it… everyone’s a little shocked. They didn’t really expect [this] because it has only been NFL players,” teammate junior Michael Lampert said.

The athletes kneeling have not received complete support from their teammates. Eight identified football players answered the survey, and none of them said they agreed with the decision to kneel. Chase pointed out that this is a controversial subject, and he can understand both sides of the argument.

“I look at it from two angles: my grandparents fought in World War II, and my grandfather took bullets for the United States. You’re connected to those sacrifices made by your own family members so on one hand, it might seem disrespectful,” Chase said. “On the other hand, flip it around for those who are in a national spotlight for protesting. They’re protesting because of police brutality, they’re protesting because things our country perpetrated upon them, which I think also gives them a legitimate right to protest as well.”

Between games in the past few weeks, there has been talk of a meeting between the coaching staff and the players who knelt. 19.7% of those surveyed believed students who kneel should be punished and 29.7% of students said they believed the coaches should have the right to punish students for kneeling during the anthem.

“I think there was a discussion about having a meeting; to the best of my knowledge the meeting hasn’t taken place yet,” Chase said.

The need to meet with the student-athletes was brought to the coaching staff’s attention when parents from the community voiced how they thought the actions taken were wrong and needed to be justified.

Chase believes the kneeling can be a distraction.

“At the end of the day, from a coaching perspective, it doesn’t matter if it’s in the NFL, or the college rank, or high school, coaches frankly don’t want to deal with it,” Chase said. “We’re not at football games to make political statements, we’re there to coach a game. It serves for coaches as a distraction.”

Head coach Scott Parseghian declined to comment on the subject.

Some people don’t like that we do it. But, when everyone’s facing the school with one hand on their heart and we’re kneeling, it just shows that we’re not afraid to be different.”

Regardless that some teammates are opposed to the notion of kneeling during the anthem, some players are in support of those who knelt. Sophomore CJ Brown rested his hand on the shoulder of kneeling Freeman before Wayland’s win over Concord Carlisle.

“CJ [talked] to Freeman before the game saying, ‘you know man, we’re best friends and everything, I totally understand why you would do such a thing. If you need me, I would 100% put my arm against your shoulder,’” Bernier said.

Despite the lack of support from a large number of students, the players who knelt are proud of themselves and of what they’re doing.

“I told my mother, ‘even if [Coach Parseghian] were to come talk to me, nothing was going to prevent me from kneeling. Football is two hours a day, It doesn’t represent my entire life. I can not play football and it wouldn’t represent me at all,” Bernier said. “I’m of black skin so no matter what I do or where I go people are always going to see I have this black skin on me. I feel this is a lot more important of a factor than playing on the football team. I’m using the football team as my best platform of executing my ideas.”

“It kind of signifies fighting [for] what you believe in, in a sense,” Gonzalez said. “Some people don’t like that we do it. But, when everyone’s facing the school with one hand on their heart and we’re kneeling, it just shows that we’re not afraid to be different.”

“You go back to the splintering of the Civil Rights Movement in 1960’s with black power and that morphs into the Olympics. It did trickle down into high school and college sports then, so it’s not new,” Chase said. “To any individual in any level, from the pros, to college, to high school, my message is the same: if this is the stance– or lack of a stance because you’re kneeling– if that’s the direction you’re going to take, my hope is that you’re doing it for legitimate reasons that you’re going to continue to follow up on and follow through on, as opposed to doing it because it’s fashionable.”

Bonds, Bernier, Freeman, and Gonzalez say they are going to continue to fight for what they believe in by kneeling as the football season comes to a close.

15 Responses to “Students stand up for their beliefs by kneeling”