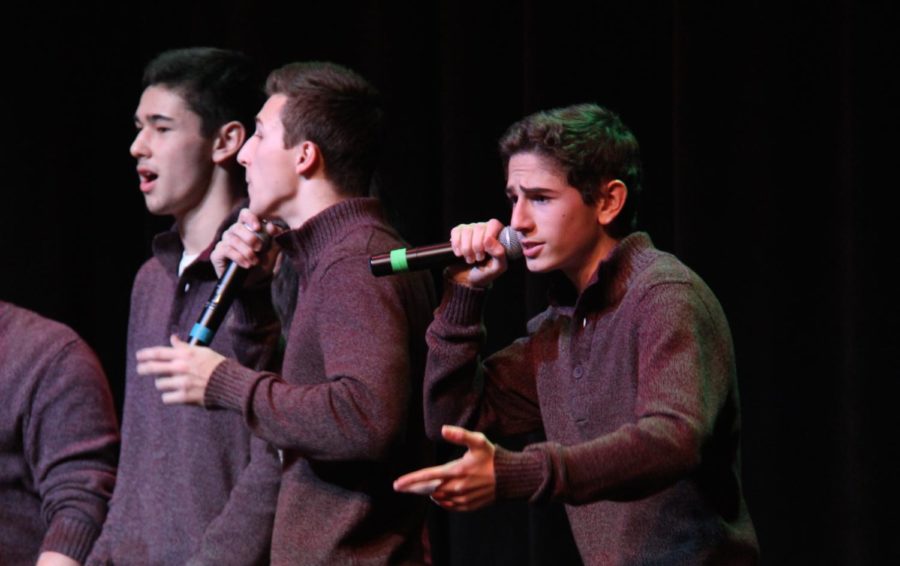 Pictured above is senior Logan Dawson singing at a cappella’s 2016’s Winter Week performance. He is one of this year’s directors for the Madrigals.

A cappella student directors discuss their role within the program

The dark auditorium, illuminated only by spotlights, hums with excitement from the rows of seating. The T-Tones, Madrigals and Muses stand backstage preparing to wow the crowd. The large audiences that all three Wayland High School a cappella groups draw in is not an uncommon occurrence in Wayland. Although the audience only hears their confident sound, there is much more that goes into the preparation from both the directors and the group members than many may not realize.

“I think it’s really good that it’s completely student run,” senior co-director of the Madrigals, Isabel Gitten* said. “I think that it’s best when the advisers are there to help us when we need anything and not really there to control any aspect of it. A cappella has always been student run, and that’s what makes it so attractive to people and makes it so popular to people who want to be a part of it.”

Wayland High School’s a cappella groups are a place for students’ talents to shine. Even less experienced students are given an opportunity to show Wayland what they’ve got as a singer.

“I was in eighth grade when I went to my first concert, and I [thought it was] really cool,” senior co-director of the Muses, Lindsay Jacobs said. “I liked singing a lot, but I never did chorus or anything in Middle School.”

In the Muses, Jacobs was given a place for her talent and experience to grow. Now, she feels comfortable as co-director.

Although the members in each a cappella group at WHS come from different levels of experience in singing, the time they spend practicing together builds family-like bonds between the members.

“The people in a cappella are honestly my family,” senior co-director of the T-Tones, Will Danforth said. “My high school career would be very very different if I didn’t have all the people, not just the T-Tones, but also the people in the other groups.”

In addition to the bonds and companionship that form between members of the a cappella groups, another thing that makes Wayland’s a cappella groups so unique is how much control the students have over the sounds that they produce.

“Actually, there’s really no teacher presence at all, and I think it should always stay that way because we make amazing music all by ourselves and it’s awesome,” senior co-director of the Madrigals, Logan Dawson said.

The directors acknowledge that arranging music and organizing their groups is difficult. They put a lot of work into the production of each song.

“It’s hard to balance being everyone’s friend and wanting to have fun with the group, but also knowing it’s your job to make sure everyone gets things done and everyone’s focused,” senior co-director of the Muses, Ella Johnson said.

The directors of a cappella may have a lot of responsibility for their group, but they are not alone in the process of preparing for a concert. If any director finds themselves in a situation where they need guidance, they are not left without help.

“Usually [I go to] Ms. Caroll because she’s the head adult of the a cappella program,” junior co-director of the T-Tones, Sid Iyer said.

The family feel of the a cappella groups even extends to Wayland High School’s a cappella alumni.

“If I have any questions or problems I can talk to [alumni],” Dawson said.

The fact that all three of Wayland High School’s a cappella groups are student-run adds to the value of their performances, and the responsibility that each student takes in their own performance.

*Isabel Gitten is a member of WSPN