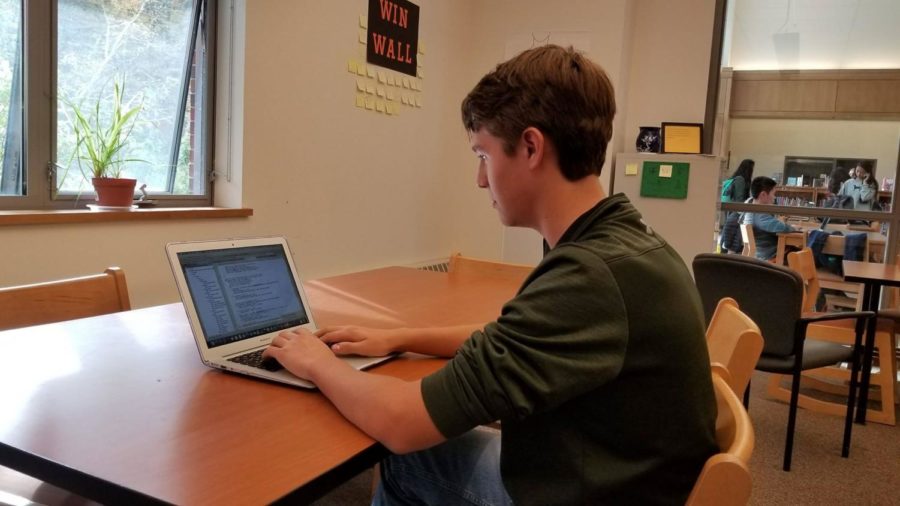 Pictured above is senior Tyler Brient coding a recent project. Brient is the creator of the website eSchoolPlusPlus.

“The Beginning” is the first of four installments about the administration’s decision to block eSchoolPlusPlus on school servers.

Wayland High School senior Tyler Brient began programming in middle school at the age of 12. He, like many twelve-year-olds at the time, was fascinated with, or rather addicted to, the game of Minecraft. Brient wanted to code a modification, or “Mod,” to the program.

“I got out a big, thick Java reference book and started learning how to code,” Brient said. “I released [the mod], did some small projects on the side and I really took off when I took AP Computer Science in sophomore year.”

“The WHS planner was cool because it was the first thing that I did that was big,” Brient said.

As Brient had to work with ten or so other students on the app, the development of the WHS Planner allowed Brient to experience what it was like to work with others on a collaborative coding project. For him, it was a transformative experience.

“We all came from different backgrounds, and we had to find a way to get everyone to do work and produce a good outcome,” Brient said. “Learning to work with people has definitely been something that I’ve learned through [the] process [of creating the WHS Planner].”

Brient began looking into an alternative to eSchoolPLUS during the first week of school when many of his friends were dissatisfied with the site.

“Everyone was logging into eSchoolPLUS and it wasn’t working. It was painful,” Brient said. “I’m the type of kid who’s a little bit grade-obsessive. I [used to] check iPass constantly, or fairly constantly. So, I didn’t really want to really deal with [issues] every time I checked eSchoolPLUS.”

The major feature that eSchoolPLUS lacked was a grid schedule, the 8×6 grid of classes that WHS students traditionally have used to navigate their way through the eight-day rotation. Although Brient knew that there was a grid schedule feature available on the WHS Planner app, he thought an online version, as iPass had, would be more accessible.

“I liked being able to go on my computer and log in to see the grid schedule, and opening a planner application that’s only on your MacBook, I felt like that was a little bit cumbersome,” Brient said. “I decided to see what I could do, and I made it.”

Thus, on Sunday, Sept. 10, Brient began coding an application that would be his biggest yet. After 12 grueling hours, Brient finished the base application.

“It kind of worked, but there were still some bugs in some places,” Brient said. “It wasn’t hosted or anything like that. At that point, it was just an application on my computer.”

Over the course of the next week, Brient would fix bugs and errors in the program. He would then go through the process of hosting the website on a server.

On Monday, Sept. 18, less than two weeks after school had started, Brient launched eSchoolPlusPlus for public use.

Next section: The Program