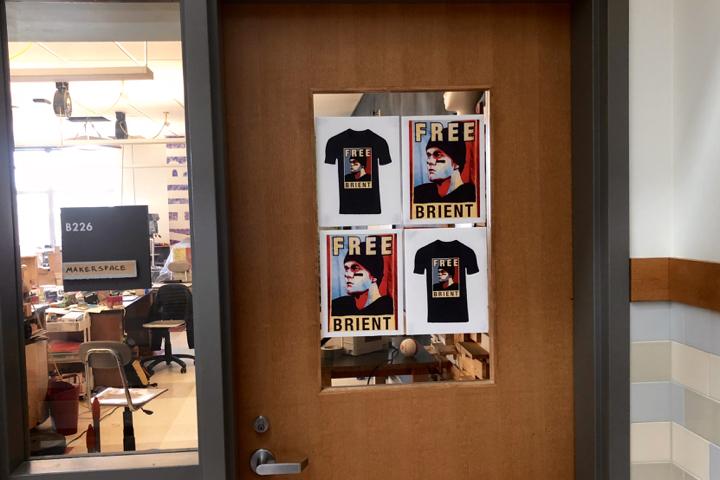 Pictured above is social studies teacher Jay Moody’s classroom door. The signs were added the week after eSchoolPlusPlus was blocked on school servers and have been on the door ever since. The “Free Brient” signs are modeled after “Free Brady” signs that trended on social media after New England Patriots quarterback Tom Brady’s “deflategate” four-game suspension from the NFL last season.

Despite a feeling of optimism in both parties at the meeting, there has not been any notification in the past four weeks as to a date for the website to be unblocked or even whether any steps have been taken toward that goal.

At the October 16 meeting between WPS administration, Brient, and his father, possible steps toward getting the software unblocked on school servers were discussed.

One possible solution was for Brient to be treated as a vendor providing a service to the district.

“Right now, we have asked any vendor or company that is providing some app or piece of software to sign an agreement that says that we promise that we will keep our student data safe,” Mizoguchi said. “One way we are thinking about this particular situation is [considering whether] there is a way to create an arrangement where Tyler and eSchoolPlusPlus are considered a business that is providing a service.”

“The main concern was the future [and] whether or not it would continue to be secure. The way to do that was through a contract,” Brient said. “So, the plan right now is for me to register an LLC, and I’m going to become the executive of that LLC. They’re going to send the LLC an agreement which their attorney will draft up, and I will sign it, send it back, and it should be unblocked.”

While the website’s users have decreased by a little over half since its blocking of on school servers, Brient noted that there are still about 400 weekly users on the site who access the domain from outside of school.

In the month and a half since the disabling of the website on school servers, the student body has still not been given an explanation as to why the blocking happened or the future of the website. In the absence of an explanation, a variety of theories spread across campus as to Brient’s predicament.

“A lot of people [said] that I got suspended, [others] said that I got sued by either eSchoolPLUS or the school; some said that I had to sell my car to pay off the dues that I owed because I got sued,” Brient said. “None of which happened; these are all rumors.”

Many students were dismayed at the administration’s seemingly sudden decision to block the website from school servers.

“I was kind of confused and annoyed, because I’ve been using eSchoolPlusPlus, and it’s just straight better than eSchoolPLUS, in terms of UI [User Interface] and servers,” junior Alec Condry said. “I was really annoyed by the blocking of it; it seemed unfounded.”

While junior Nathaniel Ames did not use the website, he felt that it should not have been blocked on school servers.

“Even though I hadn’t used it personally, I believe that it should have been an option for anyone who wants it. [eSchoolPlusPlus] doesn’t negatively affect what the teachers are doing; the teachers are putting everything on eSchoolPLUS, and it’s fine, but the students are just looking at it in a different way,” Ames said. “Students should have that freedom.”

In addition, Condry felt that the administration’s recent blocking of eSchoolPlusPlus may discourage future independent student projects from coming to fruition.

“[Brient] wasn’t doing anything wrong, he just changed the UI and made it easier to use, compared to the badly programmed eSchoolPLUS,” Condry said. “[The administration’s blocking] promotes no creativity, and when students want to improve on the situation, [the blocking] is harming that.”

Mizoguchi also saw how students could feel a sense of discouragement.

“One of our concerns about how we had to respond was [about how students would react],” Mizoguchi said. “I would understand why students would respond and say, ‘why are you discourage us. We are doing what you want us to be doing. We’re exploring new things, and it’s frustrating to hit a wall.’”

“In terms of future projects or future ways of students flexing their intellectual skill, we never want to discourage that.” Mizoguchi said. “There’s an undeniable desire to make this work… We want students who want to do more to improve lives and test things a little bit, we’ll just have to respond as creatively and respectfully as we can as an institution.”

Mizoguchi emphasized that the administration’s response to eSchoolPlusPlus now may define how similar issues are resolved in the future.

If it were to be unblocked, Brient has big plans for the website. He noted that Mizoguchi and Dolleman seem supportive of Brient expanding the website in the future. Brient noted that this included allowing eSchoolPlusPlus to securely access encrypted student disciplinary records for display on the website.

Brient also mentioned that after the website becomes unblocked on school servers, he would like to contact other schools who use eSchoolPLUS to see if they are interested in an eSchoolPlusPlus for their school.

“I haven’t really delved into that yet. Once we get it unblocked, I’ll have time to go into the rest of that,” he said. “I’ll email them, see what they’re doing and if they’re interested. If they are I can work with them on that.”

Another possibility for an expansion of eSchoolPlusPlus that Brient expressed an interest in is a teacher version of the website.

“The teachers also have [complained] about the site. It’s a problem, so we will try to fix it. I’ll see how hard it is, because students just have to look at data, whereas teachers will have to input data,” Brient said. “It might be harder, but I’ll check it out, and if it’s a possibility, I will pursue it.”

However, Mizoguchi does not see this as a possibility, at least for the time being.

“I don’t know enough about what teachers are not finding, user-friendly wise, from Teacher Access Center,” she said. “If there was a glaring lack of information or format or something, then I have a feeling that Tyler would be snooping around for that and placing his brilliance in that direction.”

“I haven’t thought completely in depth about what the future holds, but the thing that I’m best at is computer science,” Brient said. “Whether that means I’ll work for some company or I’ll make some product or whatever, I don’t know yet, but I’ll definitely pursue it in some way.”

In all, Brient enjoys the positive emotions that come with people using his programs.

“I like making stuff that people use. It gives me this really cool feeling,” he said. “I can’t explain it, but I just love it. I feel like I want to keep on doing stuff that will give me that feeling.”