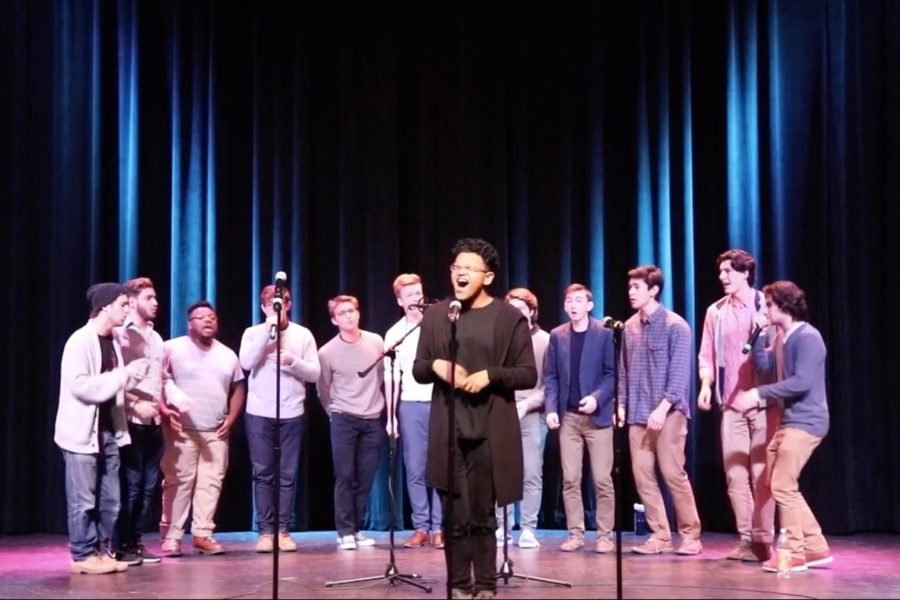 The 24th annual college a cappella concert was held at the Wayland High School theater on Saturday, December 2nd. The Hamilton Buffers from Hamilton College, S#arp Attitude from UMass Amherst, and the Nor’easters from Northeastern University performed.

WHS’s own Madrigals, Muses, and T-tones also sang. It was the second performance of the year for WHS a cappella groups. The night started off with Hamilton Buffers singing “Signed, sealed delivered” and five other songs. WHS alumni Calvin Neumeyer sang in the Hamilton Buffers.

Next, the Madrigals sang a Stevie Wonder medley soloed by sophomore Jack Wuerfl, junior Abby O’Shaunessy, and senior co-directors Isabel Gitten and Logan Dawson. Then, they sang “Fashion,” and closed out their performance with a mashup of “I Need Your Love,” “What do you mean,” and “In the Name of Love.” The mashup was called “Where are the love” and soloed by junior Alexa Calder and sophomore Will Gardner.

After the Madrigals performance, S#arp Attitude from UMass Amherst performed six songs. Their performance included songs “Make you love me” and “Dream On.”

After the Muses came the T-Tones. They started their set with “Not Over You” soloed by sophomore Sidney Toga. Next, they sang “Bad Day” soloed by juniors Nick Smith and co-director Sid Iyer. The final song was “Believer” soloed by senior co-directors Will Danforth and Zach Knapp.

The last group of the night was the Nor’easters. They performed five total sings starting with “Too good for you,” and ending with “I Wanna Dance with Somebody.”