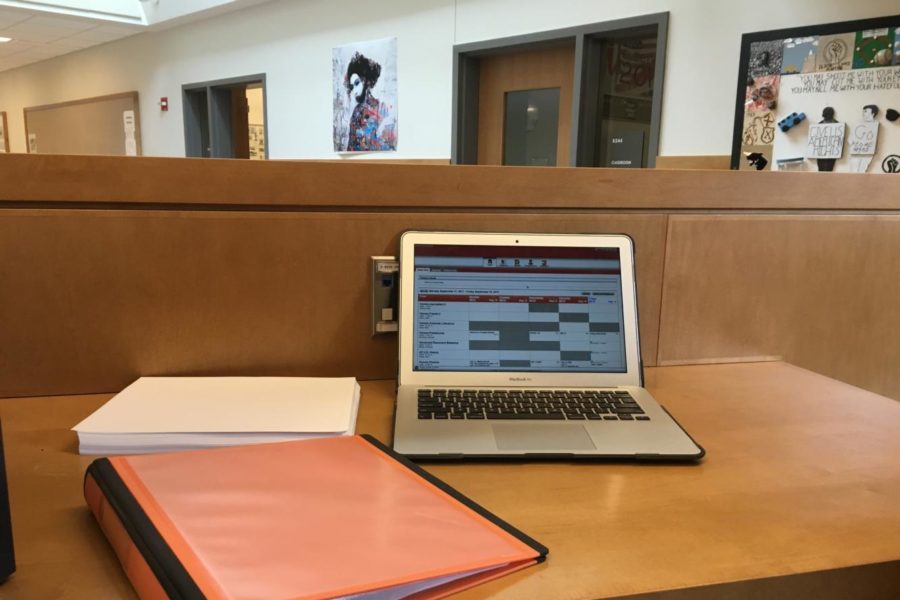 A student’s schedule is displayed on the eSchoolPLUS home screen. The scheduling process is lengthy and complex, most of which is completed over the summer by administrators and math teacher Hannah Marton. “eSchool builds the schedule for us, and we have to fix it and tinker with it,” Marton said.

How does the scheduling process work?

Student schedules were released at noon on Sept. 3, the day before school started. According to a WSPN survey, the relatively late release of schedules occurred to the dismay of many students.

According to Assistant Principal Ethan Dolleman, WHS schedules have been historically released the day before school begins, the year of arena scheduling being the one exception.

Dolleman spearheads the formation of the WHS master schedule along with math teacher Hannah Marton, while Principal Allyson Mizoguchi oversees the process. Dolleman, Marton and Mizoguchi’s scheduling work during the summer is one component of a multi-step process that begins in early spring.

Teachers enter course recommendations into the system in March. Students and their parents can either accept the recommendations via eSchoolPLUS or begin the override process. Once all recommendations are finalized, the expected enrollment numbers for each course are sent to department heads.

Department heads then make decisions to determine how many sections, or periods, of each class there will be. For example, Marton estimated that for a course with 64 requests, three sections of 21-22 students would be necessary. At that point, they also decide which classes will not run due to lack of enrollment.

However, Marton noted that other departments might differ in their approach.

“The final teacher assignment is based on what the department needs, including what [teachers] want,” Marton said.

After deciding which teachers will teach which courses, Marton and Dolleman then begin to work on the schedule itself. The first step is mass data entry into the student information system, which as of last year, changed from iPass to eSchoolPLUS. According to Marton, this made her job easier.

“We enter all class data into eSchool, one by one, class by class,” Marton said. “Usually, I do a big chunk of this. In iPass, it was a really painful process, but in eSchool, it’s much more simple.”

The next step is to run the master schedule builder program on eSchool. This is a feature that iPass did not have. On the other hand, eSchool does not have a conflict matrix, an interface where schedulers can view all conflicts in a format where they can efficiently work to resolve them.

“eSchool builds the schedule for us, and we have to fix it and tinker with it,” Marton said. “In iPass, we started to build the schedule by hand. One thing that I absolutely loved about iPass was that it would show a conflict matrix. We don’t have that with eSchool.”

Marton noted that eSchool’s actual scheduling software only takes 30 seconds to output a master schedule. However, the software will say that a certain amount of courses were not scheduled. Marton and Dolleman then have to schedule in the courses or change around how eSchool scheduled other courses.

Dolleman estimated that altogether over the past summer, he and Marton spent between 60 and 80 hours creating the schedule.

However, Dolleman said that a few unspecified factors led to this year’s schedule being created in July, which was later than originally intended. This did not allow for a solvency mechanism such as arena scheduling.

“Based on a few things, the schedule didn’t get built until later on, and it didn’t make any sense at that point to do the arena scheduling,” Dolleman said.

Arena scheduling was a system that WHS employed in August 2016 that allowed students to come in over the summer to work out scheduling issues. Guidance counselors and department heads were present to help resolve issues.

Dolleman said that arena scheduling was not an option because of the novelty of the eSchool system. However, he admitted that he’d be willing to try it out again in the future.

“We might try to embrace that model a little bit more because I think it is much better, so these things can be ironed out before the first week of school,” Dolleman said. “We’re at a point in the system where we’re better at [scheduling], and going forward, we’ll probably do [arena scheduling] as well.”

Overall, Dolleman believes that scheduling is easier with eSchool, but the schedules have been more prone to problems with eSchool than with iPass.

“Scheduling is certainly easier with eSchool, [but] I don’t think the schedules have been as good with eSchool as they have been with iPass,” Dolleman said. “Obviously, there’s always room for improvement with the situation, but the process is working well in some ways.”

Senior Michael Maurer believes his schedule was harder to fix this year than last, but he wasn’t sure whether an increase in these problems was caused by eSchool or simply by senior year courses being harder to schedule.

“I had problems last year, but they were smaller and quicker to fix,” Maurer said. “I don’t know if that’s because senior year schedules have more of a rigid setup or if [it’s] because scheduling this year was more difficult for some reason. I do think there were fewer problems when we used iPass, but I think that might be attributed to how comfortable everyone was with iPass.”

“In iPass, we had over a decade of institutional knowledge that allowed us to craft a schedule really well, because we had gone through so many iterations [so] we could predict what some of the problems would be,” Dolleman said. “Now, with eSchool, we have to get back to that place [where] we have all that institutional knowledge.”