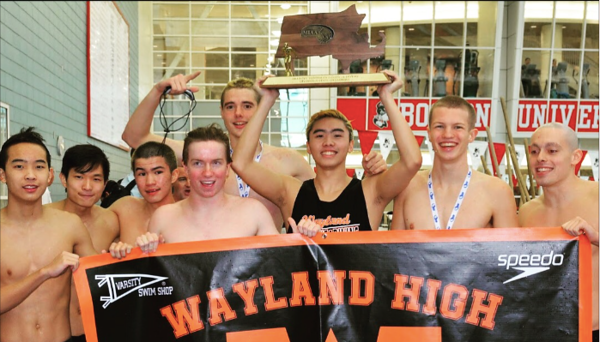 Senior Edmond Giang holds up the Division 3 Massachusetts State Championship trophy with his teammates after winning the title. Giang began swimming at a . young age and has led the Warriors to success for the past three years. "Not giving it your all is unacceptable. When you’re on that block, you just have to get locked in," Giang said. (Credit: Courtesy of Edmond Giang)

Senior Edmond Giang holds up the Division 3 Massachusetts State Championship trophy with his teammates after winning the title. Giang began swimming at a . young age and has led the Warriors to success for the past three years. "Not giving it your all is unacceptable. When you’re on that block, you just have to get locked in," Giang said.

Edmond Giang: When I step into the pool, nothing else enters my mind

Senior Edmond Giang’s passion for swimming developed in the Wayland Community Pool when he was just in the first grade, swimming for the Mighty Ducks USA competition team. Since first grade, Giang’s reason for swimming switched from a way to pass time to being competitive. Giang swam for club teams throughout both elementary and middle school, and he felt the sport became very competitive when he started swimming for the high school team as a freshman.

“Coming in as a freshman, a lot of people had high expectations for me, and I wanted to meet those expectations,” Giang said. “We had a really successful season that year.”

Giang has since made swimming one of his top priorities since he has started high school because of the competitiveness of the sport and the bonds he created on the team.

“I enjoy swimming because when I step into the pool, nothing else enters my mind,” Giang said. “It has a really competitive aspect which makes me work hard with my technique and training, and it definitely grows a strong bond between me and my teammates.” 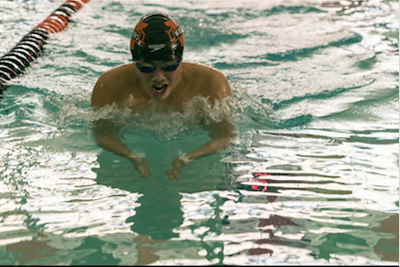 Giang takes a stroke during a breastroke race at a meet.

In Giang’s sophomore and junior years, Wayland swimming saw some of the strongest teams in its history. The Warriors went undefeated both years, winning two Division 3 State Championships in a row.

Giang is a leader at the pool, and he thinks that it is important that he and other seniors are role models for underclassmen. He felt that when he was an underclassmen, older students had a large impact on making him a better swimmer.

“As seniors, we have to lead the team like our previous seniors have done for us, and now we have to show these young guys how it’s done,” Giang said. “We have to show how hard we work in practice in order to go three years undefeated [and] win the state championship.”

Giang feels that the team definitely has the potential to win another state championship this year, but that he has to work hard in helping the underclassmen, especially freshmen, gain confidence.

“We have to make sure that our freshmen especially are believing in what they can do,” Giang said. “The newcomers are always doubting themselves. They think they can’t [do things], and it’s affecting them in practice. It’s our role to take them out of their comfort zone in order to achieve the goals that we want.”

Throughout his time swimming at the high school, Giang has scored many points in competitions, and this year, he can potentially break the record for the most points scored for a single swimmer in Wayland High School history. Giang’s best events include the 100m fly, the 100m backstroke and the 200m individual medley.

While Giang acknowledges that breaking the record will be a big accomplishment for him, he thinks that how the team performs overall is more important.

“It’s really up to the coach,” Giang said. “It doesn’t really matter how many points I score; it’s how much I can contribute to the team, and if that means I have to go out and score points even in one of my weaker events, I’ll go out and do it.” 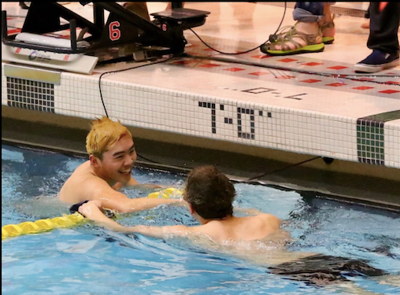 Giang shakes the hand of a competitor at the 2018 Massachusetts Sectional Meet after finishing his race and helping the Warriors to a team win at the meet.

Through his multiple accomplishments, including putting records on the board in individual events, Giang was recruited by multiple colleges. He received emails and letters from coaches around the country, but he had to contact the coaches of the schools he wanted to go to himself.

Giang eventually decided to commit to Bates College, where he will be swimming next year at the Division 3 level. He will also be playing for the Bates Water Polo team.

“I decided to apply to Bates since their coach really reminded me of one of my club coaches that really put the team ahead of the swimming aspect,” Giang said. “This helps everyone grow as people, and the secondary effect is that everybody wants to work hard for each other.”

Giang is looking forward to swimming in college, but he knows it will be a whole new experience for him.

“Swimming at college is a whole different level than swimming at high school,” Giang said. “The kids are faster, the workouts are harder and there are more aspects and levels to training and conditioning. You have a strength coach and nutritionist, so you have to watch what you’re eating, because the workout is only a third of the training. For me to help contribute on the Bates team to beat teams like Tufts [University], Williams [College] and Amherst [College], who are the top 3 teams in the NESCAC, I need to make sure that I’m doing everything properly.”

One of the things that Giang will remember the most swimming for the high school is how his teammates have supported him and helped him develop into a strong competitor.

“[In high school] you know that your teammates are there for you, [and that] they want you to do better and they want you to contribute,” Giang said. “For any lack of effort or laziness, your teammates can see that, and they’re gonna get at you for not trying hard because we have a winning culture. Not giving it your all is unacceptable. When you’re on that block, you just have to get locked in.”