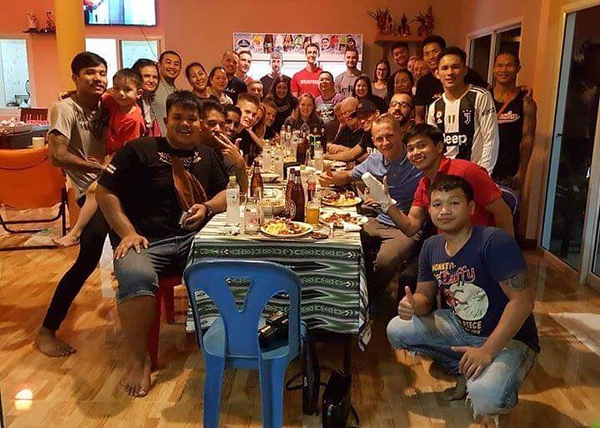 2018 graduate Peter Wolff shares a meal with Thai students. While staying in Thailand, Wolff was able to focus on his studies of Muay Thai. “I was staying in the middle of nowhere,” Wolff said. “There were rice fields all around, and the fun thing to do was to go to 7/11 and get a snack. It [was] good because there [were] not many distractions.”

Peter Wolff: You won’t have this kind of opportunity later in life

Gallery|14 Photos
Credit: Courtesy of Peter Wolff
2018 graduate Peter Wolff shares a meal with Thai students. While staying in Thailand, Wolff was able to focus on his studies of Muay Thai. “I was staying in the middle of nowhere,” Wolff said. “There were rice fields all around, and the fun thing to do was to go to 7/11 and get a snack. It [was] good because there [were] not many distractions.”

While a majority of the class of 2018 wrapped up their first semester in college and recently returned home for the holidays, graduate Peter Wolff returned home from Thailand, where he spent the past four months studying Muay Thai, a popular martial art in Southeast Asia.

Wolff began studying Muay Thai in the United States but wanted to take his studies of the martial art to the place it originated as a part of a gap year program before beginning his post-secondary education.

“I wanted to go [to Thailand] because you can learn a lot quicker [there], and you can learn from people who’ve been doing [Muay Thai] their whole lives,” Wolff said.

“Your goal is to knock the other person out,” Wolff said. “They may get cut and there could be a ton of blood. Even though it’s a really violent sport, there’s still a beauty in there, which is kind of amazing.”

While in Thailand, Wolff practiced and lived at a gym nearly 2 hours away from Bangkok, the capital of Thailand. He appreciated how disconnected it was from urban distractions.

“I was staying in the middle of nowhere,” Wolff said. “There were rice fields all around, and the fun thing to do was to go to 7/11 and get a snack. It [was] good because there [were] not many distractions. In Bangkok, there [are] so many things to distract you.”

Wolff’s Muay Thai teacher in the United States had attended this gym as well.

“My [Muay Thai] teacher here went to this gym,” Wolff said. “You could do [Muay Thai] through a lot of gyms in Thailand, and he said this gym was good for me because it was really good for beginners. They [also] have a coordinator for foreign people coming in.”

The gym devoted most of the week to practicing Muay Thai. From Mondays through Saturdays, Wolff was training, usually beginning his day with a quick run.

Wolff then ate breakfast and had a rest period before beginning his afternoon training, which consisted of going on a short run, then sparring or clinching. Sunday was Wolff’s day off. Some of his classmates would trek into Bangkok for the day, while others used Sunday to catch up on sleep.

“Sundays you just want to rest [because] you’re so beat,” Wolff said. “You [could] go to Bangkok for the day. It was a 2-hour drive.”

While training and learning the art of Muay Thai himself, Wolff also got the chance to watch professional Muay Thai fights.

“It’s such a [big] part of their culture,” Wolff said. “It’s just another sport there. They have it at small festivals [as well]. It’s kind of cool to see how ingrained in the culture it is. The Thais love watching [Muay Thai] and they love [betting] on it too.”

Wolff remembers that for a country that marvels at such an aggressive sport, Thailand has a relatively laid-back attitude, especially when comparing it to Wayland and the rest of the United States.

“Something’s bound to screw up your plan,” Wolff said. “Whatever happens happens. It’s just Thailand. You gotta learn to deal with it.”

According to Wolff, Wayland has an excellent system for helping students find gap year programs. He is traveling to Malaga, Spain for the second half of the year to study Spanish because of a pamphlet he found in Wayland’s language office.

“[I’ll] do 3-4 hours of Spanish every day,” Wolff said. “I think they do a very good job of integrating [the class] into the culture too. It’s very interactive with how you’re learning it.”

According to Wolff, it isn’t difficult to take a gap year after applying to college. In fact, Wolff stresses that students plan their post-secondary experience ‒ education or otherwise ‒ before taking their gap year.

“If anyone’s interested in taking a gap year, apply to schools when you’re a senior because you’ll have guidance counselors with you,” Wolff said. “[After getting accepted], send [your school] a letter, say [you’ll] defer for a year.”

Wolff is attending Fordham University next year. He noted that taking a gap year made him more driven to do well in school.

“I’m definitely much more motivated to go to school,” Wolff said. “If I had waited until after college, I don’t know if I would have been able to fight.”

Wolff believes gap years are a good thing and provide positive experiences, especially to students who want to more deeply explore something they enjoy.

“I’m getting to do things now that I don’t think I would have been able to do later in life,” Wolff said. “You won’t really have the opportunity later in life to do these amazing things. I feel like that’s the best.”