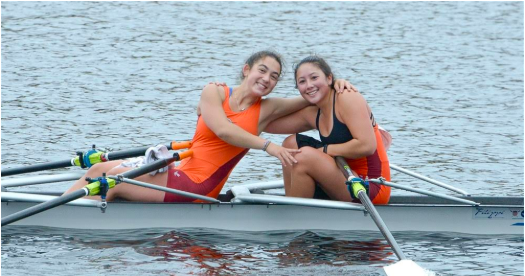 Senior rowers Jenna Cook and Julia Pak competed in this year’s state championships at Merrimack River in Lowell, Massachusetts. Both Cook and Pak will continue to pursue the sport in their college career. “I told [college coaches that] they can watch me at the Head of the Charles, and throughout my whole junior year I kept in contact with some coaches,” Cook said. “In the beginning of my senior year, I went on four different official visits to Brown, Georgetown, Boston College and Dartmouth, and I just knew that Dartmouth was the place where I wanted to be.” (Credit: Jenna Cook)

Senior rowers Jenna Cook and Julia Pak competed in this year’s state championships at Merrimack River in Lowell, Massachusetts. Both Cook and Pak will continue to pursue the sport in their college career. “I told [college coaches that] they can watch me at the Head of the Charles, and throughout my whole junior year I kept in contact with some coaches,” Cook said. “In the beginning of my senior year, I went on four different official visits to Brown, Georgetown, Boston College and Dartmouth, and I just knew that Dartmouth was the place where I wanted to be.”

For the majority of the senior class, college admissions are just around the corner, but some outstanding athletes already know where they are almost certain to attend. The Class of 2020 has over 15 students who have already committed to college to play a sport, and it’s barely November. Senior athletes Carly Camphausen, Jenna Cook, Nathan Weinstein-Molloy and Mason Bolivar are four of the many committed athletes who are taking their commitment to their sport to the next level.

Cook will be rowing Division I at Dartmouth College in Hanover, New Hampshire.

“Towards the end of my sophomore year, after winning youth nationals for rowing, I decided that I wanted to continue rowing in college and continue competing at big competitions like that,” Cook said. “I started looking at different colleges and realized that it would be possible for me to be recruited to a school. I just wanted to continue doing the sport that I love in college.”

Some athletes knew very early on in their high school careers that they wanted to continue their sport in college. Bolivar, who will be playing Division III football at Trinity College in Connecticut, has had a longtime dream of playing in college.

“I decided around, I’d say, freshman year, when I played a little bit of varsity football, [that I wanted to play in college],” Bolivar said. “Coach [Scott] Parseghian started talking to me about getting recruited, and I didn’t know if that was a thing [then]. But, I’d love to play college football, so I started thinking about it freshman year.”

After playing a sport for many years, many athletes don’t want to let go of the memories and skills they have created throughout their time on the team. Weinstein-Molloy, who will be running Division III track at Babson College, wants to continue to improve his skills throughout college.

“I just really enjoyed hurdling throughout my four years of high school, and it kind of felt wrong to end it off at the end of high school,” Weinstein-Malloy said. “I just want to keep on seeing where I can go with the sport.”

Unlike the regular process that many students go through when applying to colleges, recruited sports players have a different experience. Along with the reassurance that you’re already in college, student-athletes have to meet other requirements. Camphausen, who will be playing Division I lacrosse at Brown University in Providence, highlighted the difference that knowing where you are going to go makes.

“It feels really good to know that I know where I am going and [that] I know where I want to go because I know a lot of people are still struggling with where they want to be,” Camphausen said. “I’m still a little nervous because I still have to actually get in, but I know that it’s sort of a different situation because I only have to write one college application, which is super nice, and all my friends are writing up to 10. So, it’s definitely more relaxed.”

Even with the statement of being a “college commit,” nothing is confirmed for these athletes until they receive a college acceptance letter in the mail. With that in mind, these students still have the pressure of keeping their grades up and ensuring that nothing will jeopardize their commitment.

“I feel like people think that when you get recruited, you automatically have the weight completely off of your shoulders, and you’re in college,” Cook said. “For me, I’m very superstitious, and I feel like nothing is finalized until I get that letter from admissions. [The] college stress that all of my peers are facing now is something that I faced towards the end of my junior year and more in the beginning of my senior year.”

Student-athletes have had different experiences with the recruiting process, whether they invited coaches to watch them play, went to showcases or communicated with college coaches about their sport and their achievements.

“Towards the beginning of my junior year, before the Head of the Charles, which is a regatta in Boston that’s pretty big, I started reaching out to a few different colleges and telling them my individual 2k score,” Cook said. “They call it the SAT of rowing because it’s a standardized test [for] all rowers. Basically, you row 2,000 meters as fast as you can, so everyone has their individual times, and then I started sending that out to colleges and sending out my different race results.”

For most athletes who are interested in playing a sport in college, the recruiting process begins by reaching out to coaches at colleges and explaining who you are and expressing your interests. From there, coaches can watch film or visit events of that student to get a better look of their athletic abilities.

“I didn’t really start the recruiting process until the end of junior year during lacrosse season, and I just put together film,” Bolivar said. “I put together a Google Doc with a bunch of information about myself and a little introduction about who I am. I sent it to a bunch of colleges and coaches, and then they started responding, and that is kind of how it started.”

With a new team comes new teammates, which can help the incoming college freshmen make friends before classes even begin. Being able to make connections on teams across grades at the college level is an exciting aspect for many of the committed athletes.

“I’m really excited when I go to college to have a team,” Camphausen said. “I think that’s super helpful making friends first of all, especially being a freshman in college. Also, [it’s good to] just have a group of people who are any range from freshmen to seniors whom you are just best friends with. I’m super excited for the level of intensity that it will be. It’s definitely something that I haven’t experienced before.”

Along with the guarantee of having a group of friends, college allows for these commits to compete with other athletes who pursue the same sport. Not only will these future teammates support them off the field but also on the field as well, pushing them to improve their skills.

“I’m really excited to work with a bunch of different girls from really strong programs,” Cook said. “I’ve already been in contact with a couple of the other recruits from my year. They just seem really amazing, and they’re all from really good programs too. I think that it’s going to help me grow a lot as a rower.”

The transition from high school sports to college isn’t easy, for there are many drastic changes that these commits will face. One of the biggest adaptations many commits have is training in a new, more intense environment that they’ve never experienced before.

“I feel like football isn’t a huge deal here at our school,” Bolivar said. “It’s a fairly large deal, but at Trinity, football is huge. The stadium is packed and super hype, and I like that feeling of like Friday nights, but we play on Saturdays. It’s probably the hype which will be the most fun for me.”

Although the recruitment that these athletes go through requires dedication and individual hard work, the Wayland sports community also does its part in supporting their players in the process in many ways.

“I’d say Wayland football has by far helped me the most because during the summer we lift and work out and stuff, and having that long schedule from summer all the way to the fall gave me a good understanding of what college football would be like because it is a lot of time and dedication,” Bolivar said. “We go pretty hard during the summer, and I enjoyed the challenge so I think I’d enjoy college football.”

Student-athletes also contribute their success to their coaches who also play a significant role in their sports careers. For some of these commits, it is undeniable that without their coaches, they may not have been at the place where they are at now.

“My coach is a big help. Coach LaClaire, she always kept me motivated,” Weinstein-Molloy said. “The good coaching has helped me a lot.”

While some of these athletes have relied on the support of the Wayland sports program, Cook had a different experience, doing most of her college application and work herself.

“To be honest, I did most of it on my own,” Cook said. “I didn’t have a recruiting coordinator, and my coach didn’t really help me with the recruiting process. I guess since Wayland-Weston crew existed, it introduced me to rowing.”

The opportunity for these athletes to play in college doesn’t come easily. While the real recruitment may begin in high school, it is  year’s worth of dedication and hard work which has led them up to this moment.

“I played sports my whole life, [and] I decided that [playing sports in college] was something that I wanted to do [because] I love lacrosse,” Camphausen said.