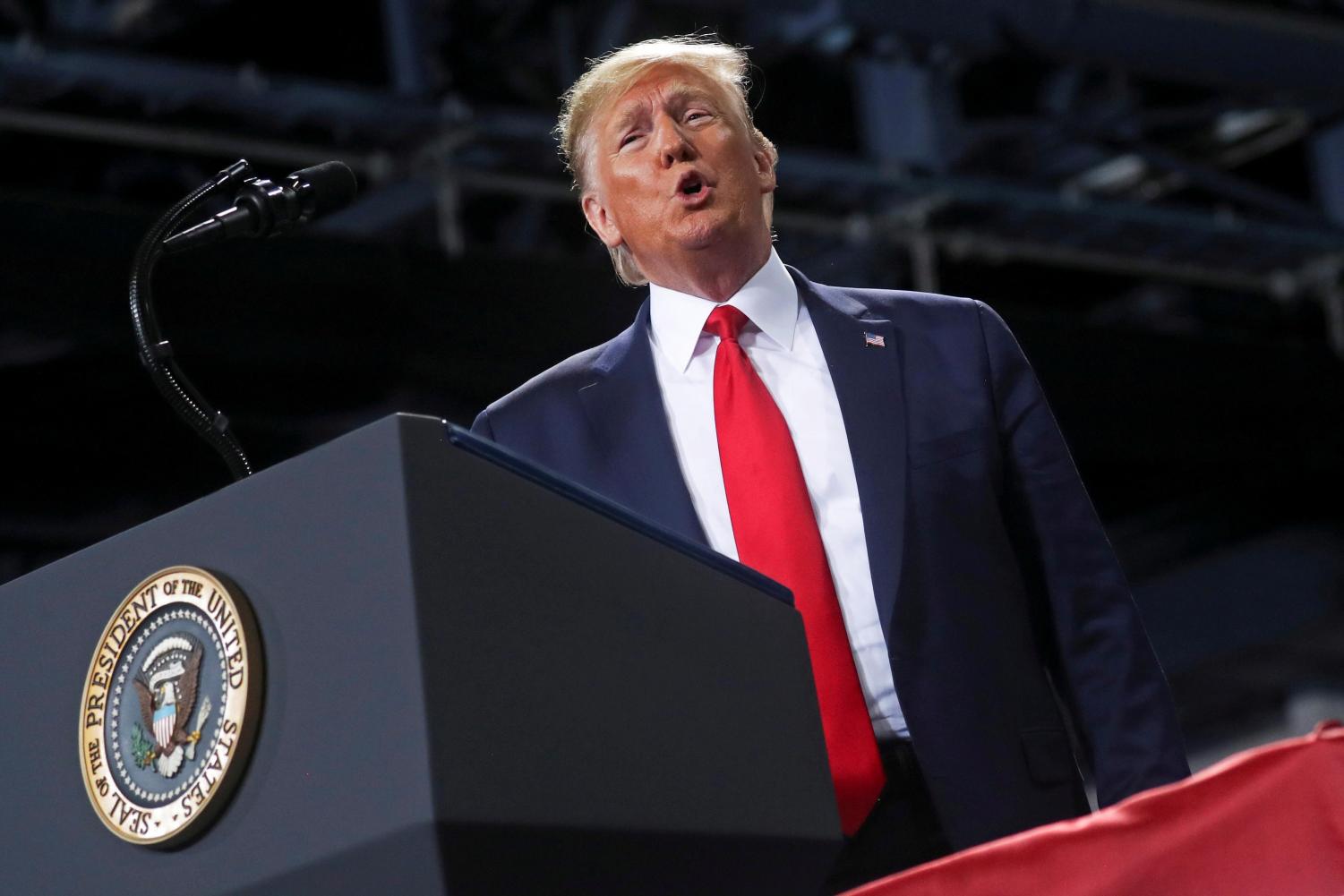 The Impeachment of Donald Trump: Two Sides of the Argument

In this side-by-side opinion series, staff writers Atharva Weling and Jonathan Zhang tackle the impeachment process and its implications for the success of the Democratic agenda.

Opinion: Impeachment is the answer

Honesty and integrity, decision making that benefits the people and someone who listens to the people: these are the traits of a good leader. President Donald Trump is not a good leader and should no longer be tolerated.

Honesty and integrity place a crucial role in leadership. As the CEO magazine tells us, “Honesty is a leader’s most valuable and most valued leadership quality; it serves as the gateway for trust and inspiration.”

Trump has lied to us on more than one occasion. For example, he claimed that he built his multi-billion dollar empire through his own means. This is a lie. A special tax fraud investigation in the New York Times based on tax returns and financial records revealed that Donald Trump received the equivalent of $413 million from his father’s real estate empire in tax schemes dating back to his childhood.

When citizens lose faith in their leader, they start to become suspicious of the leader’s actions. Citizens won’t agree with the leader and follow his direction. In this case, if a leader doesn’t have his people’s trust, then people will be less inclined to believe the leader’s motives for passing the law.

On Oct. 21, 2018, the Trump administration revealed its attempt to define gender as a binary determined at birth and based on genitalia. According to The Williams Institute, this affects 1.4 million adults in the US who identify as transgender. Trump’s actions show his disregard and lack of empathy for his people. Trump’s decision is one that harms his people, reversing the efforts and difficult decisions that these 1.4 million adults made to come out. Not only does this disregard put a lot of emotional pressure on people who are transgender but it’s also bad for two reasons. First, by targeting a major faction of the LGBTQ+ body, others in the group will start to have fears of being targeted themselves. Second, The Williams Institute tells us that the LGBTQ+ body is comprised of approximately nine million people. This is an outrageous amount of people to neglect by making a rash and poorly thought out decision.

To make matters worse, this isn’t the only time that Trump has made rash decisions affecting both millions of people and other significant figures. Furthermore, it’s not just his own people that he’s affecting. On Oct. 18, 2018, Trump tweeted “In addition to stopping all payments to these countries, which seem to have almost no control over their population, I must, in the strongest of terms, ask Mexico to stop this onslaught — and if unable to do so I will call up the U.S. Military and CLOSE OUR SOUTHERN BORDER!” This would affect a caravan of more than 3,000 immigrants from places like Guatemala, El Salvador and Honduras.

The date was Oct. 9, 2018. Trump’s disregarded protestors rallied against the confirmation of Supreme Court Justice nominee Brett Kavanaugh. He refused to listen to the crowd, believing the protestors to be ‘paid protesters’ during Kavanaugh confirmation who ‘haven’t gotten their checks’.

Also, in Trump’s infamous phone call with Ukrainian President Zelensky, Trump asks Zelensky “to do us a favor though because our country has been through a lot and Ukraine knows a lot about it.” What exactly was this favor? It was “to have the Attorney General call [Zelensky] or [Zelensky’s] people and…get to the bottom of it” using Crowdstrike, a cybersecurity technology company. The “it” is unknown but it is generally accepted that Trump was asking Zelensky to look into potential political opponent Joe Biden.

Trump was clearly trying to use his power unlawfully – having another country investigate into a political opponent. So not only does Trump not care about his own people, but he’s also only fixated on himself and how he can stay in the position that he is in.

Let’s change that. Trump possesses none of the traits of a good leader and has shown this to us. It is only natural that we show him we won’t obey his antics any longer. Impeachment will do this for us. Impeachment is the answer.

Opinion: Impeachment is not the answer

There are so many questions surrounding the implications of the impeachment of Donald Trump. It’s the third time in American history that a president has been impeached, and if the Senate decides to make him the first president to be removed from office, their decision could have ramifications that extend across the world.

Is it morally justified to impeach Trump? Yes, absolutely. There is overwhelming evidence suggesting that the president offered the Ukrainian president a quid pro quo of investigations into the business dealings of Hunter Biden in Ukraine in exchange for the release of $400 million of Congressionally-approved military aid and a White House visit. This accusation is backed up by dozens of transcripts, emails and depositions. President Trump’s guilt is all but certain and his actions clearly amount to an abuse of power.

But should the focus really be on whether or not it is right to impeach Trump? After all, the effort is undoubtedly partisan, with zero Republicans voting for either of the articles levied against the president. Such polarization will undoubtedly follow the articles into the Senate, where the Republican majority could easily knock it down. Senate majority leader Mitch McConnell has even announced that he will not hear new testimony during the trial. Given the high likelihood that these events will not culminate in President Trump’s removal from office, we have to wonder whether the other effects they could have are beneficial to the Democratic cause.

The first possible benefit of impeachment could be that it hurts President Trump’s image and his chances of reelection in 2020. The problem here? That same polarization that has been made so evident Congress extends to the general public as well. More and more voters are being pushed away from the center of the aisle, especially on the right as Trump partners with the media to build a narrative based on a fear of Democratic “socialism” and “corruption.” Over the course of his presidency, Trump has made more than a few awful policy decisions and unseemly comments, but the fact remains that his core demographic of mid to far-right voters continues to vehemently support him. If anything, impeachment gives him another way to demonstrate his outsider position in Washington to them and give them more of a reason to vote for him as the only candidate not part of the supposedly corrupt Washington bureaucracy.

But the broader problem with impeachment stems from the fact that while the president has committed serious crimes against American democracy, nobody really cares. For most of our nation’s Democrats, President Trump was something that had to be dealt with whether he was impeached or not. Even if the entire impeachment process had never played out, they still would have shown up on election day and cast their ballot Democrat simply because they don’t like Trump. Rather than cause their base to become more vocal, impeachment risks pulling Democratic officials away from policy issues that are more important to their voters such as securing more funding for social programs. Without addressing these problems, Democrats risk alienating more moderate voters who could be essential on election day.

Not only does the public not care about impeachment as much as policy change, but President Trump has also actively created distractions from his wrongdoings. Whether or not his missile strike on Iran was designed to be a distraction from the charges against him cannot be confirmed, but the truth is that it has captivated the public’s attention. With the heightening tensions with Iran, impeachment, and the already pressing issues facing our country before either of these fiascos, Democratic candidates are forced to cover a broad range of issues to appeal to as many voters as possible, but in doing so, they lose the ability to have a strong rallying point against the Trump administration. They’ve spread themselves too thin and now they have to play catch-up, trying to tackle each issue as it comes while also struggling through the impeachment process.

At the end of the day, was impeachment even necessary? With the inherent lengthiness of the process, we could have to wait months before an end of this scenario finally arrives, especially as further disagreements have led House Speaker Nancy Pelosi to withhold the articles from the Senate. But it’s an election year! With such impassioned public opinion against Trump, couldn’t a well-run Democratic campaign knock him out of office in November? What the actual result of impeachment will be is yet to be revealed, but it seems plausible that the risk may not have been worth taking.