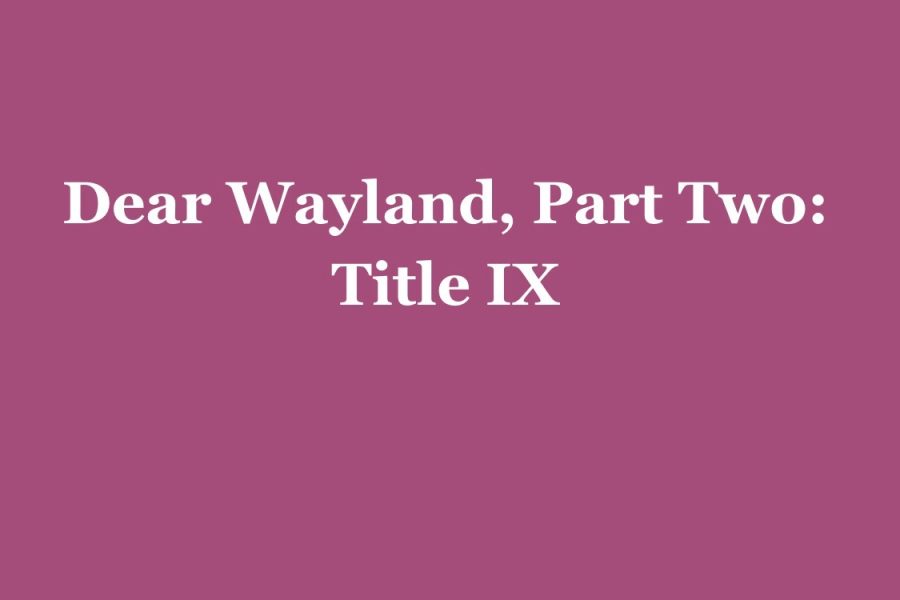 In response to the Dear Wayland Instagram page, superintendent Arthur Unobskey encouraged families and students to contact their school principal or the WPS district Title IX coordinator if they believed they were the victim of sexual harassment.

In the subsequent letter addressing how the District planned to work toward a harassment-free learning environment, six steps were outlined. The last step was to clarify the formal complaint process.

“As indicated yesterday, formal complaints of sexual harassment can be made through Director of Student Services, Richard Whitehead, who is our Title IX Coordinator, or through building principals, who can outline the federally mandated steps we must go through to investigate thoroughly, ensure due process, and protect the rights of all involved,” the letter read.

In order for a student to make a “formal complaint,” students needed to speak with either Richard Whitehead or a building principal. Telling any other staff member in the District would not constitute a formal sexual harassment complaint. Following the submission of a formal complaint, a process outlined by federal policy Title IX would then be invoked.

Title IX of the Educational Amendments of 1972 is a federal civil rights law that protects people from discrimination based on sex in education programs or activities that receive federal financial assistance. Depending on whether or not it meets certain criteria, sexual harassment of students can be a form of discrimination prohibited by Title IX.

Title IX defines sexual harassment in three ways: quid pro quo sexual harassment (offering a favor in return for sexual acts or vice versa), hostile environment sexual harassment (conduct so severe, pervasive, and objectionably offensive that it hinders one’s education program or activity), and sexual assault, which could mean dating and domestic violence and/or stalking. If the alleged conduct in a formal complaint does not meet these standards, the school is not obligated to investigate.

In order for the alleged perpetrator, or “respondent,” to face disciplinary action, a formal complaint must be filed, and the respondent must be found guilty in the subsequent investigation. A formal complaint is a document signed by the complainant, the complainant’s parents, or the Title IX Coordinator that declares sexual harassment and requests the District to investigate the allegation of sexual harassment.

“…If what they share with us rises to a particular threshold of concern, we may need to pursue something more formally than [the complainant] had originally anticipated,” Mizoguchi said.

“A thorough investigation can take, obviously, a lot of time depending on the nature of the situation,” Mizoguchi said. “…an investigation has the potential to be emotionally trying for the person who comes forward… but, through informing the complainant of the process, through offering and providing those additional supports, and also by addressing the steps as promptly as possible, hopefully, we can kind of help protect the complainant from any undue stress or worry.”

Retaliation against the complainant for filing a complaint either by or on behalf of the respondent is specifically prohibited by Title IX.

“[Retaliation] in itself is subject to discipline and action,” Mizoguchi said. “[Complainants] would have a similar reporting structure [to report retaliation]: they would go right back to the investigators or the designees–myself, the title nine coordinator, or whoever is part of the investigation–and report what had happened. That would [then] open up a whole other next phase of the investigation.”

The school may not refuse a particular service requested by the complainant without documenting why it would be ineffective or inappropriate, and there’s no limit to how long a complainant may receive supportive measures.

In addition to these new regulations, Title IX won’t always apply to incidents that occur outside the US either. For example, if an incident of sexual harassment were to happen on a school exchange program or trip outside of the country, the school would not be obligated to investigate should the victim file a complaint.

The final change to Title IX is that the District has to receive notice of an allegation (or an employee needs to witness an incident of harassment) before school officials can investigate; whereas before, the District could begin an investigation if it had constructive knowledge of an incident.

If you believe you are the victim of sexual harassment and would like to file a formal complaint, reach out to your building principal or Richard Whitehead at [email protected]