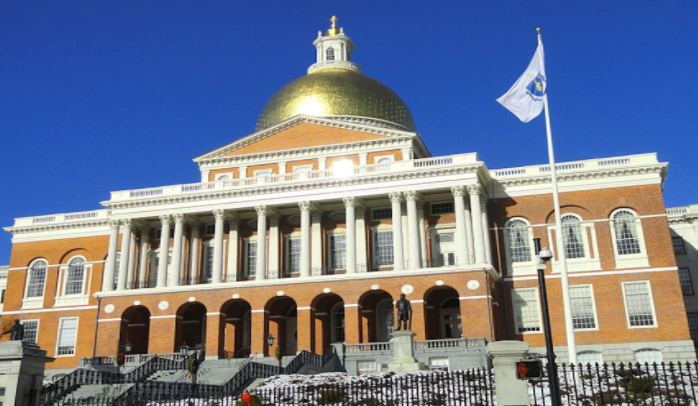 The Massachusetts State House stands on Beacon Hill. Mandates from the Commissioner of Elementary and Secondary Education have forced schools to revert to all-in person, five days a week learning in April. If the schools don’t comply, they could lose funding or be liable to legal action from the state.

How does the state fit into the decision? As a key component. Arguably, the Wayland School Committee didn’t decide to send students back into the all-in model: the state did.

On March 5, Riley first mandated that all grades K-5 must return to the all-in model by April 5. A few days later, on March 10, he mandated the same for grades 6-8 but postponed his decision on high schools until April at the latest.

After April 5 and April 28 for elementary and middle schools, respectively, remote and hybrid model school days will no longer count toward satisfying the state’s required learning hours. Failure to meet the certain back to all-in date could also result in the loss of state funding and would leave the district vulnerable to action by the Problem Resolution System. The same tools of enforcement are expected to be applied to the pending decision on high schools.

The WRAP program, or all virtual model, will still be permitted and families at the high school may opt into the program.

During the School Committee’s deliberations, Superintendent Arthur Unobskey and committee members seemed convinced that Riley would mandate high schools to return to the all-in model within a matter of weeks.

Rather than scramble to make the necessary preparations when the expected mandate is announced, the School Committee felt it was best to prepare preemptively and set the return date ahead of time.

Returning after April vacation will allow for building and custodial staff to prepare the middle school and high school buildings for twice the occupancy, and the Professional Day on Monday, April 26 will allow teachers to prepare for the new model.

After returning, there will still be eight weeks left in the school year. Wayland High School seniors will have just over five weeks left before their last day of classes.

Schools may apply for a waiver from the state that would allow them to continue in their hybrid or remote models, but Unobskey told the School Committee this would not be an option for any of the district’s schools.

“It’s pretty clear to me that the waiver process is designed…for schools that simply can’t make the transition, in other words, there are schools that have been remote all year and simply couldn’t do all the things to get [all in] by early April,” Unobskey said during the March 3 School Committee meeting. “I think that a district with our resources and in our situation right now, I really strongly believe that the waiver process is not designed for a district like Wayland.”

During the School Committee meeting on March 3, before the state mandated grades 6-8 to return to all-in learning by April 5, Unobskey hinted at a phased in return model in which the elementary school would return first, followed by the middle and followed by the high school.

Citing logistical reasons such as traffic and bussing, Unobskey at the time felt this would allow for the smoothest transition. But with the middle school mandate from the state and the expected high school mandate, Unobskey was the one who proposed the same day return date plan that was ultimately adopted by the School Committee.

When Unobskey made his recommendation to return to school all in person, five days a week on April 27, he gave three reasons as support. The first was students’ mental health, uncertainty about home situations and the importance of daily contact with students. The second was a concern for Zoom burnout, especially as the weather gets warmer. The third was the importance of getting kids back into the rhythm of going to school everyday.

“We’re going to have kids who struggle in school everyday,” Unobskey said to the Committee. “There’s going to be a return of stress of getting ready, getting dressed, dealing with the social aspects of school and those distractions and having academic expectations that are different when they’re in person. It’s going to be hard. I think we need to have them face that challenge and nurture them through it. It’s not going to be easy, and I think we need to do it. It’s really important to do it before the end of the year before we start school next year.”