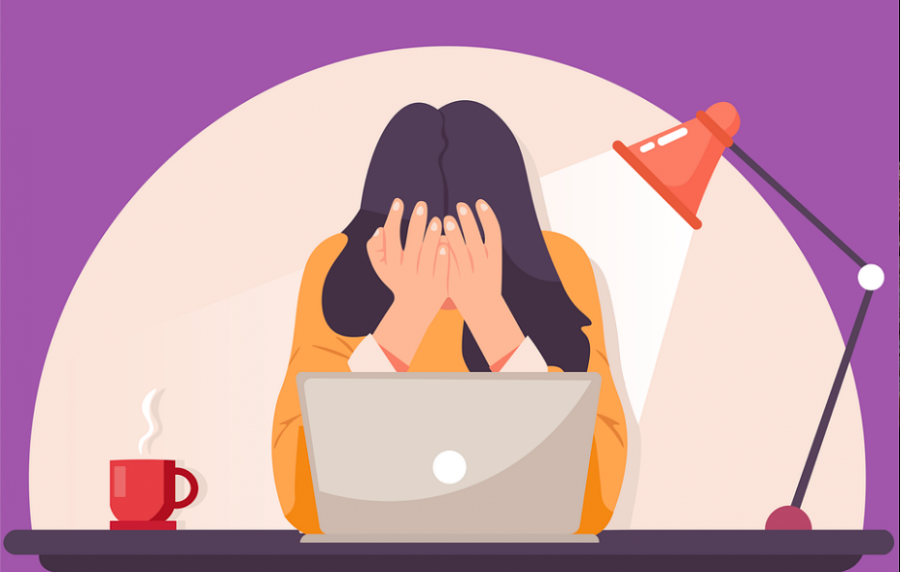 Many students at WHS find the academics to be rigorous and sometimes stressful. Pressures from within the school and from families can create that environment. “I think the problem with stress is less so systemic and indicative of Wayland High School, and more so personalized and individualistic, meaning I think parents in certain households put more pressure on their kids than parents in other households for whatever reason,” senior Sam Goldstone said. “Students themselves internalize that pressure and reflect that back on themselves and on their friends.”

Students: “We feel pressured to succeed, and it’s harmful”

High school prepares students for life in the workplace or in college. However, many students feel pressure to succeed during school to ensure their place in the “real world.” Many WHS students agree that the drive for success leads to unhealthy habits and a culture that emphasizes academic achievement above all else.

A stressor among some students is the drive to work hard in school and take challenging classes to get into the college of their choice. Some parents put pressure on their kids to live up to a certain standard of education. According to Wayland, Massachusetts Educational Data from Town Charts, approximately 83% of people living in Wayland 25 years or older hold a bachelor’s degree or higher. In Wayland, some parents with high-level college degrees want the same path for their children.

“You still feel the pressure [from people saying] ‘my parents went to Harvard, or my parents went to Yale Law school,’” senior Armen Abrahamian said. “Even if it’s not Harvard or Yale, even if it’s Boston College, some feel that pressure all the time, and I don’t feel it’s really healthy.”

The desire for college acceptance can cause stress for some students, which is most prevalent when college applications are due. At WHS, seniors are under constant pressure to receive admission into a good college, and some students take their stress out on their peers.

“[There is] way too much [pressure] to the point that it’s borderline toxic in most interactions [during] first-semester senior year,” Abrahamian said. “I mean to the point where mean comments are the norm. It’s definitely a big issue in Wayland.”

[There is] way too much [pressure] to the point that it’s borderline toxic in most interactions [during] first-semester senior year.”

For some students, the cause of stress is not even at school—it’s at home. Sometimes, families put pressure on their kids whether they mean to or not, and this reflects how their kids act when they get to school.

“I think the problem with stress is less so systemic and indicative of WHS and more personalized and individualistic,” senior Sam Goldstone said. “I think parents in certain households put more pressure on their kids than parents in other households for whatever reason. Students themselves internalize that pressure and reflect that back on themselves and their friends.”

There are students who take more challenging classes to stand out to colleges and make their resume look the most desirable to elite schools. Sometimes, this becomes a pressure and weighs heavier than their actual interest in those classes.

Although there are students who face many outside pressures, some students face internal issues that cause them stress and to fall behind.

“I feel like I have been very stressed out, but only because I am a master procrastinator, and I like to wait until the last minute to do things,” freshman Adam Lange said. “I got frustrated throughout the year because I thought that I had something during the day that I didn’t, or I had an assignment due that I didn’t know. It’s all about organization.”

It takes a lot of courage to ask for help, and it can be troublesome for many people. However, many students know that it would be more complicated in the long run if they don’t ask for help.

“There were some times where I just completely didn’t understand a topic, and I would have to say ‘can you re-explain that,” Lange said. “Sometimes I might look stupid saying that, but my grades are depending on it, and I’m depending on it.”

Although most students face periods of time where they are confused in classes and need help, not all students feel comfortable asking questions even when they need to.

“I would just say I’d do [the work] myself or I’d take the [loss],” Abrahamian said. “I feel like the annoying part is it’s not easy to ask for more help.”

I would just say I’d do [the work] myself or I’d take the [loss]. I feel like the annoying part is [that] it’s not easy to ask for more help.”

External and internal pressures and lack of engagement in classes can lead to a drop in mental health among students. According to the WHS Guidance Mental Health Data from 2009-2019, there was an average of 11 mental health issues per year.

“I feel Wayland doesn’t do a really good job helping us,” Abrahamian said. “I feel it’s more a ignore and push away tactic that they use. It’s like, ‘okay let’s not talk about [certain pressures], okay, let’s move on.’ I think that’s not helpful either. Maybe it’s just that nothing would be helpful because sometimes people will say ‘oh, it will be okay,’ and nobody believes that.”

Some students feel that WHS is not giving adequate support to the students and being at school is simply to pass a test. For them, learning to understand and create a connection with the information taught is more important than circling the correct answer on a test.

“[The message from school] was like what should matter is what’s in the curriculum,” Abrahamian said. “You have to study for your test, perform well on this test, and [cram] all the time. That definitely works for some people, and I can understand that, but I feel like there should be an alternative. I feel like I just wanted to learn, and I feel like that was stifled.”