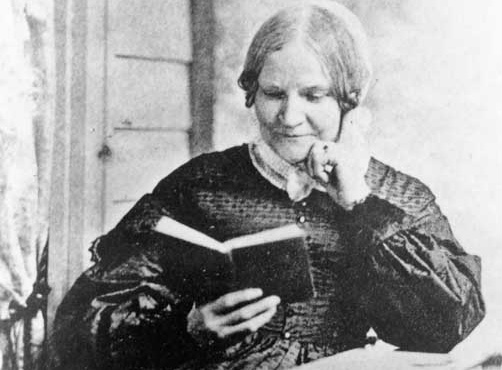 Lydia Maria Child was born in 1802, and her lifelong activism against injustice inspired the Lydia Maria Child awards in Wayland. She is best known for her variety of works such as, “Over the River and Through the Wood” and “An Appeal in Favor of That Class of Americans Called Africans.” “She not only never wavered in her beliefs but was all the more determined to devote herself to them,” Historical Society member Jane Sciacca said.

“She was not a non-controversial figure to say the least. She was one of the earliest who opposed slavery, and she wrote about her opposition and received massive push back over it,” Public Ceremonies Committee member Donna Bouchard said. “She was a novelist prior to speaking about abolishing slavery and when she spoke about it the cancel culture came after her… it was a way for people to stop buying her books.”

Child authored works such as the famous poem, “Over the River and Through the Wood,” and the 1883 book, “An Appeal in Favor of That Class of Americans Called Africans,” among others. This book was a call for the immediate emancipation and abolition of slavery without compensation to slaveholders. During her residence in Wayland, she housed and provided for runaway slaves escaping the Fugitive Slave Law, and despite societal shunning, was seen as a champion of anti-slavery and an example for all.

The award was founded in 2009 with the intent to honor the citizens of Wayland for their efforts to aid the community of Wayland. However, some controversies arose over the nominees that year.

“The Public Ceremonies Committee [created the award],” Wayland Historical Society member Jane Sciacca said. “The award was immediately controversial as the Committee chose the six people who had expressed or written opinions that were critical of the people–including the Selectmen–who ran the Town.”

As disagreements between townspeople intensified, some protested the awards altogether because of the potential for radical nominees.

“[Nominees] don’t necessarily follow the same path,” Bouchard said. “The people who [received] the award in 2009 had been critical of the town government and had been trying to make changes. So when it was announced, somebody actually stood up and made a motion that it be tabled, meaning they wouldn’t allow it.”

However, this choice also proved contentious, and the town decided to annul the shutdown.

“Things that you do that don’t necessarily agree with the consensus aren’t necessarily wrong,” Bouchard said. “They’re controversial. So when we look at Lydia Maria Child, she wasn’t wrong for wanting to abolish slavery, but many [saw] her view at the time as extremely controversial.”

“Maria was turned out from fashionable circles in Boston, and people ceased buying her advice books,” Sciacca said. “But, she not only never wavered in her beliefs but was all the more determined to devote herself to them. I think that 21st-century people [possess] a greater understanding of the issues she advocated, but I think that there is still a lack of knowledge as to what she represented. She did not seek popularity, but truth as she saw it. A truth that came from her spiritual beliefs that human beings should be treated with respect and dignity, no matter their race, religion or country of origin.”

To determine each year’s honoree, the Wayland Public Ceremonies Committee accepts nominations from town members. They send a bulletin to news media outlets, and town members send 500 words or fewer nominations. The Committee then considers each nomination and votes for a nominee. The process for the 2021 Award began in March. The Committee will announce the winner later this spring.

“Honestly, it’s not that every year a controversial view arises in Wayland and needs to be recognized for their controversial views,” Bouchard said. “It’s just that sometimes it takes extra strength to stand up and do what you believe is right.”