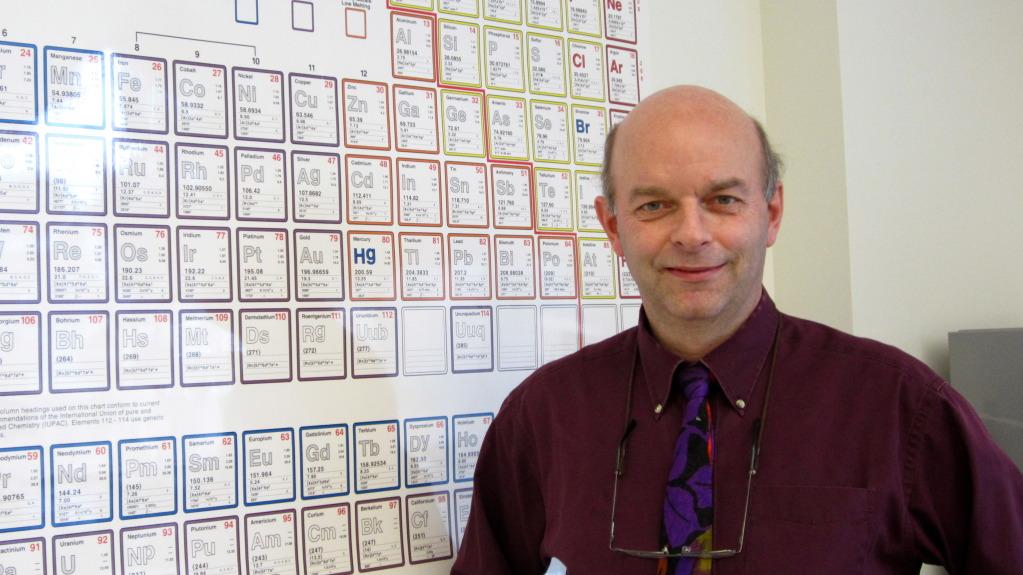 Jay Chandler taught his final chemistry class in his 30 year career yesterday, May 6th. Chandler officially retired in December but taught AP chemistry remotely through the exam on Friday, May 7th.

Jay Chandler taught his final chemistry class in his 30 year career yesterday, May 6th. Chandler officially retired in December but taught AP chemistry remotely through the exam on Friday, May 7th.

A mentor to many over the past 30 years, science teacher Jay Chandler’s taught his final class yesterday, May 6th. For three decades, his teaching career helped students grow to love chemistry. Now his legacy will live on through former students and colleagues.

AP science teacher Cyd Tyska benefited greatly from Chandler’s work. Tyska knew Chandler for 20 years, and she grew as a teacher and a person from working with Chandler. She enjoys talking to Chandler about everything from teaching to her family, even though their relationship did not start that way.

“When I first came to Wayland as a brand new teacher, I had only been teaching for about four years, and I was pregnant with my oldest son, so that was twenty years ago,” Tyska said. “I think I was nine months pregnant when I came in for my interview, and he always jokes around how he took one look at me and was like ‘We are not hiring that woman,’ and of course they hired me.”

Tyska says that her career would be completely different if it did not include Chandler. Chandler helped Tyska learn the AP College Board level of teaching. He played a large role in the school community by being more than just a teacher: Chandler was also the President of the Union at Wayland High School and played with the high school band. He is an avid trombone player.

“He is a master teacher. He is like the Yoda of chemistry,” Tyska said. “For the community, it’s a huge loss to have such a veteran teacher who has been so successful in AP Chemistry and honors chemistry [leave].”

Chandler retired earlier this year because of COVID-19 but continued to teach AP Chemistry remotely through the exam on May 7th.

“He’s retiring, and people are saying congratulations, but I honestly feel like he will miss teaching greatly,” Tyska said. “He is a true caretaker of the students. He genuinely wants the children to learn.”

Phoebe Greenaway is one of Chandler’s former students who attended his Q-Chem class during the 2019-2020 school year. Greenaway looked forward to his class because of Chandler’s positive attitude and fun teaching style. For many students, chemistry is very challenging, but for Chandlers students, each class was enjoyable and fun.

“He is so iconic to the science department,” Greenaway said. “He has an impact on every student that takes his class, and when I think of chem, I immediately think of Mr. Chandler. He always made sure everyone in his class understood every unit.”

Greenaway was glad to have been a student in Chandler’s class. She, like many of her classmates, will miss Chandler as he retires this year. Greenaway’s glad to have had a teacher like Chandler, who positively impacted her learning career.

“He is not only a good person, but he is also one of the best teachers I have ever had,” Greenaway said. “His class was truly a good part of my day, and I always looked forward to his class.”

Paul Shiffler, one of Chandler’s colleagues at WHS, worked with Chandler for over 15 years. Shiffler knows that Chandler will be missed by a large amount of the community and especially his students.

“He tells jokes and makes people comfortable in class,” Shiffler said. “That’s going to be missed. A real genuine sort of, ‘I’m here about chemistry, and in the end, we’re going to get to know each other.'”

“No matter what level they end up learning it,” Shiffler said. “That affects the community in terms of all the students that he works with. They have a very good and positive science class that year. Then they are better students. If you are a better student, then you sort of become a better person overall in terms of the school community.”

Many students and teachers will miss Chandler’s strong presence at Wayland high school.

“He has been such a mentor to me in so many ways,” Tyska said. “He will definitely be missed.”