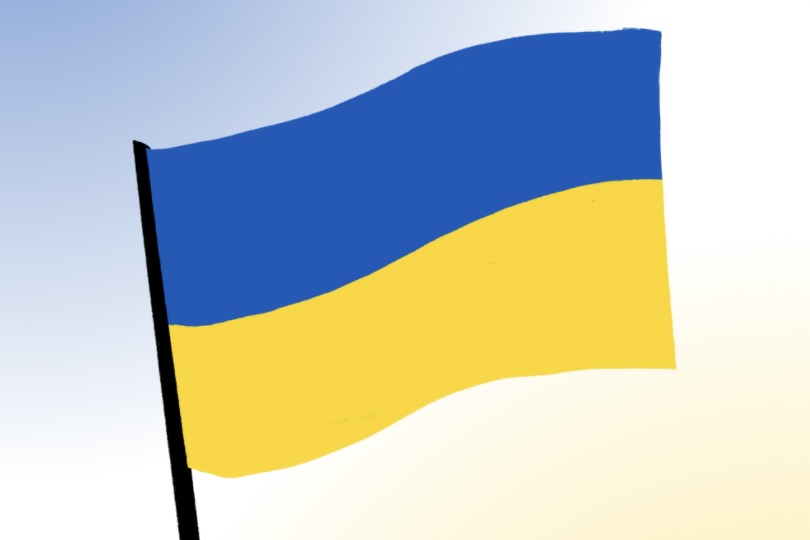 Join WSPN’s Emily Roberge and staff reporter Bella Schreiber as they discuss their opinions regarding U.S. involvement in Ukraine.

Two Sided Opinion: Contemplating the effects of the U.S. military in the Ukrainian war

“This is about more than just Russia and Ukraine,” United States President Joe Biden said.

As blood continues to spill in Ukraine, Biden responds with medical aid and a promise to protect other NATO countries. But what about the country that has been put in the middle of this tough situation? What about Ukraine?

An unasked question hums through the air, itching at anyone who’s willing to say it out loud. Why isn’t the United States, or any country–especially those part of NATO–sending in more soldiers to fight alongside Ukraine?

It is no secret that without a little more help, Ukraine most likely won’t end up winning this fight. Ukrainian President Volodymyr Zelensky has spoken many times to other world leaders practically begging for them to implement a no-fly zone in Ukraine or send more troops to help.

A no-fly zone, which no other countries seem to want to implement, would help Ukrainians feel a little more safe in their homes. It means that there are certain areas in the sky where if any aircraft tries to fly through – specifically armed ones – the army must immediately shoot it out of the sky. The only issue with a no-fly zone is that it appears that whatever country is shooting Russian aircrafts is also asking to fully join the war, meaning there is a good chance the war would amp up to a new level.

I think the best move would be to send more soldiers to help out on the ground and leave out the no-fly zone. Entering the war and immediately implementing a no-fly zone would most likely escalate things to a new level. The goal is not to obliterate Russia, it is just to stop them from taking over. Ukraine simply needs a few more hands and a few more guns to help out.

Ukraine has such a small number of soldiers that the government has turned to ordinary civilians. They have used not only their strength, but also their smarts, to hold back Russia. Street signs have been switched and turned around, people have learned how to make Molotov cocktails and they are getting a hold on any weapons they possibly can.

Why is it that everyday people, the same as you and me, have been fighting so hard for so long, and we can’t even lend them a few more people? We can provide an experienced and trained army that can really keep people safe. With both parties working together, I truly think we can end this war.

Although I think they could be doing more, I am happy to say that the U.S. has not been completely silent in their response. We have sent medical aid and weapons to assist, even if we are hesitant to send our people. It is also notable that the U.S. have stopped sending and receiving sensitive technology that helps with Russia’s military. On top of that, many banks and specific bank accounts have been frozen in order to stop Russians from accessing U.S. money. This means that Russian workers have been getting paid less, and Putin is unable to touch his money placed in U.S. banks or in any major Russian banks like Sberbank, VTB Bank and more.

Unfortunately, no amount of money could make up for the mass amounts of lives being taken from both sides. There are speculations of almost 1,000 deaths and even more injuries rising on just the Ukraine side. The war inching on with no end in sight is bad for everyone, as casualties are climbing and climbing.

If the U.S. just provided Ukraine with more military help and soldiers, maybe it would end faster. The concern of escalating the war is very valid, but as human beings we can’t see a death toll of more than 1,000 between both sides and not offer anything else to help.

Understandably, there have been sizeable amounts of rumors and concern due to the fact that people fear if the U.S. or other NATO countries get involved, it could escalate into a World War III or lead to the use of nuclear bombs. I want to clarify that just because we should get more involved, doesn’t mean we should be using nuclear bombs or doing anything to cause that much devastation in Russia.

Another important part of this is that we still don’t fully understand Putin. Personally, I think even if he gets control of Ukraine again, he won’t just stop there. He will plow through as many of Russia’s neighbors as possible until he physically doesn’t have any troops left.

We should not only be concerned about the fate of Russia, but in a sense, the whole world. Putin is an extremely power-hungry man which has been demonstrated on multiple different occasions. He has attempted to take over Ukraine and is advocating that many of his neighbors should not be part of NATO, most likely because he wants to take them over eventually.

It’s salient that we measure each of our next moves carefully as we don’t want to hurt Russian civilians either. Although we are frustrated with Russia’s actions, we must remind ourselves that this is not the Russian civilians fault, it is Putin’s. Russians are also being put at risk, and unfortunately for them, it is extremely difficult to express concern with the government or leave Russia without being hurt or killed before making it out.

The U.S. should aid Ukraine from afar

Vladimir Putin is ravaging Ukraine, taking every little piece of power and domination he can grasp with his blood-covered hands. Furthermore, he doesn’t seem to be slowing down. There’s no denying it: Putin is an evil monster. But what about the country that loves war? Should the U.S. risk the lives of troops to fight in a war that is no direct threat to our country?

It’s no shock that Russia has extreme nuclear capabilities, and frighteningly enough, Putin hasn’t ruled out the possibility of using them. In a recent interview with CNN, a Putin spokesperson repeatedly refused to rule out Russia utilizing nuclear weapons. In fact, when asked under what conditions would Russia use its nuclear capabilities, the Kremlin spokesperson said, “if it is an existential threat for our country, then it can be.” The ambiguity of his words is telling– Putin is unpredictable, and we can’t risk the lives of our soldiers without knowing all of the information.

The implications of a direct U.S. military intervention could be catastrophic, leading to what could be World War Three. It’s not a given that the U.S. sending troops to Ukraine will result in Russia using nuclear weapons, but it’s highly likely as Putin will feel a “threat” to his intervention. Look at the nuclear capabilities for both the U.S. and Russia for proof. If the United States were to intervene and bring soldiers to Russia, they have the military capabilities for up to 5,943 warheads. It has been estimated that Russia has up to 5,977 nuclear warheads, with 1,185 being intercontinental ballistic missiles, 800 being submarine-launched ballistic missiles and 580 air-launched nuclear bombers. Both Russia and the United States are nuclear powerhouses, and a U.S. intervention by troops could possibly lead to two things: irreparable damage in Ukraine and increased U.S. soldier fatalities. Other than the protection of Ukraine and the Ukrainian people, there seems to be more bad than good that can come out of this.

For Putin, it’s all about a power game. With a military intervention, the U.S. could possibly disrupt Russia’s invasion of Ukraine, and Putin recognizes that. The United States is a threat to Russia. In 2022, they ranked #1 in the world for global fire power. Now, these are where Russian threats come into play.

“No matter who tries to stand in our way or all the more create threats for our country and for our people, they must know that Russia will respond immediately and the consequences will be such as you have never seen in your entire history,” Putin said in a televised message in February.

That’s what we must consider.

Now, don’t get me wrong, I want the United States to respond to Volodymyr Zelensky’s pleas for help, but sending more troops isn’t the answer. Do I feel morally wrong saying this? Of course. I wish our troops could help fight alongside the Ukrainian forces in defeating Putin, but we shouldn’t lose the lives of U.S. soldiers to something that could have even greater catastrophic effects if we intervene.

In my history class, we are learning about foreign policy, and it really has me thinking. There are so many connections between the past and present. In 1917, the United States under President Woodrow Wilson was debating whether or not to keep neutrality or to enter into World War I, sparking the creation of Wilson’s 14 Points, where the ultimate goal was to “keep the world peace.” Since then, the U.S. has had a history of budding into foreign conflicts like in Iraq and Afghanistan, where the lives of many soldiers and innocent civilians have been lost. However, we are still having the same timeless foreign policy conversations today as we were over a hundred years ago. Needless to say, we are a ‘war-obsessed country.’ There’s a notion that the United States must be the “policemen” and saviors of the world, when in reality, that hasn’t always worked out for us.

So, are the U.S. troops being sent to Ukraine? Originally, Biden said no, but there has been recent talks after a NATO summit that he might deploy some troops to Ukraine. As of right now, we don’t really know the answer. But, we do know that Putin’s actions are like a ticking time bomb ready to blow up. What happens next? We just have to wait and see.

I am no foreign policy expert, but I do know that we must be strategic with how we position our troops if the U.S. chooses to deploy some to Ukraine. Yes, it is our moral duty to protect and aid other countries, especially Ukrainians who need our help.  However, we also must remember to protect our soldiers first and foremost.

No matter where you stand on the discussion of whether troops should be brought to Ukraine, I think we can all agree that Putin must be stopped before it’s too late. No more lives should be lost, and no more blood should be shed for his extreme greed and cruelty.