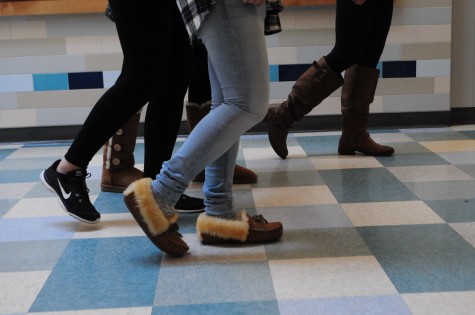 Students rush in the hallway during an ALICE drill. An annual "ALICE" drill will take place at WHS on Thursday, Oct. 18. “In order to prepare well, we need to imagine that our safety has been breached and respond accordingly," WHS Principal Allyson Mizoguchi wrote. (Credit: WSPN Staff)

Students rush in the hallway during an ALICE drill. An annual "ALICE" drill will take place at WHS on Thursday, Oct. 18. “In order to prepare well, we need to imagine that our safety has been breached and respond accordingly," WHS Principal Allyson Mizoguchi wrote.

WSPN’s Jackie Stoller and Isabel Gitten argue the pros and cons of the ALICE safety protocol.

ALICE, the new safety protocol, provides students with independence and options if the unexpected happens. The new system encourages students to make quick decisions and react based on the situation. It gives students the responsibility that they deserve.

Under the previous lockdown system, students were required to sit in a dark room to hide from an intruder. Lockdown is sometimes a good option, which is why ALICE has the L for lockdown. If the time and situation is right for a lockdown, then students can do so. However, not only does the new system allow for lockdown, it encourages people to run if possible. ALICE is a balance between lockdown and evacuation.

If the intruder gets into the room, a group of students sitting is an easy target. The shooter could easily shoot at the clump of students, injuring or killing them all very quickly. A moving target is much harder to catch. Also, in the old lockdown system, teachers were required to put a green piece of paper outside the room to indicate that all the students were present and safe. If the intruder saw a green piece of paper indicating all of the students were in there, the intruder would target that classroom. With ALICE, students have the option to sit in the room if they want, or to leave.

ALICE is centered around the idea that if one wants to leave, he or she can do so right away. If they want to stay in the room, the students and teachers can barricade the door with as many heavy objects as possible before hiding. The lockdown part is now much more active and realistic. If someone did get through the barricade and into the room, the students have the freedom to throw books and other heavy objects at the intruder. If I was in a situation like this, I definitely wouldn’t just let it happen; I would take a stand. ALICE takes this instance into consideration. It prepares for fighting back (with the barricade, throwing books etc.), and encourages students to protect themselves.

The last part of ALICE is the most important step: evacuation. This is biggest difference from the lockdown. The faculty and police department’s goal is to protect as many students as possible. If the students can get safely to a door, then that would be the ideal situation. But, if that is blocked off, breaking a window would be the next best option. Once students do get out, the police department will have set up three meeting spots to flee to that will have officers there to help. If for some reason people can’t get to those spots, the goal is to get as far away as possible from the school.

ALICE is a very good system that should be used at WHS because it gives the students the responsibility that they deserve.

Opinion: ALICE is a plan that leads to chaos

ALICE, the new safety protocol at WHS, is a plan that can lead to chaos. This new procedure is all about “freedom of choice.” Students now have the freedom to decide whether they want to run or hide in case of an emergency. Giving every student the ability to make their own decisions is flawed and could cause one student’s judgment in this situation to hurt others.

As much as it is hard for us to admit, high school students don’t always make the best decisions, let alone when they are in a dangerous life or death moment. According to the American Academy of Child and Adolescent Psychiatry, a part of the brain called the frontal cortex that controls judgment, reasoning and thinking before acting is still developing throughout one’s teenage years. Especially when it comes to reacting to fear, a teenage brain does not always have a thoughtful response. The still developing teenage brain panics on impulse, which does not always lead to the best decision.

In simpler terms, a teenager’s brain is not as good at making in the moment decisions as an adult’s. ALICE is specifically based on making quick choices in high pressure moments. Through the system, students have the freedom to directly disagree with an adult or a group of students and do what they want. Therefore, a student could directly disagree with someone whose brain is developmentally better at making choices in tough moments.

Teachers have had much more training taking action during an intruder invasion than students have. They are more aware of the patterns of school shootings and how to deal with them than most students are. There are definitely cases when a student may have a better idea, and if this student’s idea is smarter, then the whole class should follow it to ensure the safety of everyone. I think that students and teachers should make decisions as a group to be safe.

ALICE is about making the best decision for an individual. For me, the “every man for himself” mindset is not most effective in every intruder situation. If an intruder attacks and countering is the best thing to do in the moment, it is important that everyone does the same thing. One person attacking an intruder will most likely not stop them. With ALICE, students don’t need to make the same choices, so in a situation where it is smartest to counter, if a few kids decide to run, one student could be left to defend themselves alone, which is not a situation that anyone would like to be in.

I am not saying that ALICE is completely flawed. I do believe there are many aspects of this new plan that will benefit students in an emergency. The fact that students now have the option of fleeing instead of hiding in a classroom is definitely a smarter technique. The five aspects of ALICE (alert, lockdown, inform, counter, and evacuate) are better options than just hiding; however, I do not think giving every student the ability to disagree with one another and do whatever they want is safe.

My biggest concern for ALICE, is the lack of unity and trust it creates throughout our school community during an intruder invasion. What I envision when it comes to a moment in which our school will have to use ALICE is students not caring for each other and doing what only they think is best for themselves. Caring for one’s safety is important, but if someone abuses their privilege to make their own decision and not follow the group, they could endanger others.

When considering what you would do in a tragic situation when using ALICE is necessary, I think it is important to not just think of yourself, but also about doing what is safest for the entire group. A choice an individual makes can impact others. One’s judgment in this situation may not be the best.