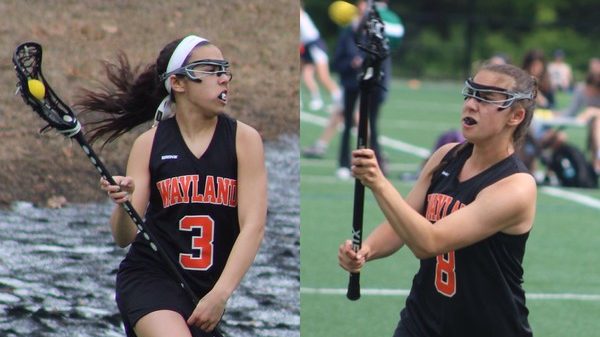 Above are Jackie (left) and Abby (right) Stoller playing lacrosse. The Stollers have both verbally committed to colleges to play lacrosse. “Being so close in age, we always challenged each other to be better,” Jackie said. (Credit: Courtesy of Jackie and Abby Stoller)

Above are Jackie (left) and Abby (right) Stoller playing lacrosse. The Stollers have both verbally committed to colleges to play lacrosse. “Being so close in age, we always challenged each other to be better,” Jackie said.

Many siblings have similar interests. For junior Abby and sophomore Jackie Stoller, their common interest is lacrosse. The Stollers have been playing lacrosse together for almost eight years, and the sport has become a huge part of their lives.

Younger sister Jackie first expressed interest for playing lacrosse in third grade. Once her sister began playing, Abby wanted to play too. The sisters quickly fell in love with the game. Since their start as third and fourth graders, the two having been playing on the same town team almost every year. At first, they just played in the Wayland youth recreation league. But in 2011, the sisters decided to improve their game by joining the club team Mass Mavericks.

“Playing with Mavericks helped me with my fundamentals and made me realize where lacrosse could take me in the future,” Jackie said.

By sixth and seventh grade respectively, the Stoller sisters were playing lacrosse competitively all year round.

In 2015, Abby and Jackie joined the club lacrosse team Laxachusetts. The sisters still play for the team today. Both girls started varsity games in the 2015 season.

The Stoller sisters say their success comes from each other.

“Being so close in age, we always challenged each other to be better,” Jackie said.

In the first game of the 2016 season, the Stollers scored a combined nine goals. In the off season, the two practice with each other. The sisters agree that spending time training outside of practice helps their dynamic on the field.

“I think having a sister with similar lacrosse abilities really pushes me,” Abby said.

Jackie and Abby both play midfield on the WHS varsity lacrosse team, and the pair works well together. The sisters respect each other’s skills and say that they motivate each other to be better players.

“Jackie is very fast and I am always really impressed to watch her play,” Abby said.

“Abby and I have definitely developed into different players,” Jackie said.

Both sisters knew they were interested in playing lacrosse after high school. In her freshman year, Abby began contacting college coaches to come to tournaments and watch her play. A year later as a freshman, Jackie did the same. Before their club tournaments, the sisters would email around fifteen coaches and assistant coaches each telling them the time of their games, where they would be playing, their position and their number so they could spot them on the field.

“Seeing coaches on the sidelines of a game always made me a little nervous, but I learned to not stress about it or focus on them and just pay attention to my game,” Jackie said.

During freshman and sophomore year, the coaches are not allowed to respond or contact the players directly under MIAA regulations. Instead, the college coaches that the sisters reached out to had to respond via their club coaches who would relay information to girls. When a college coach expressed interest in one of the sisters, he or she would have to speak to their club coach who would pass on the information.

“The hard process of speaking to college coaches made me realize how serious and real playing after high school was,” Jackie said. “As a freshman, I had to think about what I wanted to do as a senior and beyond.”

With support from their parents, they both attended multiple camps and clinics to get noticed by college coaches who would assess their skills. The sisters had to spend many weekends during their freshman and sophomore years traveling to colleges to showcase their skills. The Stollers have been to over 25 clinics all around the country in the past two years.

“The recruiting process was stressful, but it definitely paid off in the end,” Abby said.

“I immediately fell in love with the campus, coaches and team when I visited. Union was the perfect fit for me,” Abby said.

While they are at college, they will not be able to play together for the first time in four years.

“I think it will be good for us to have separate college experiences, but I will definitely be sad not to have her on the team,” Abby said.