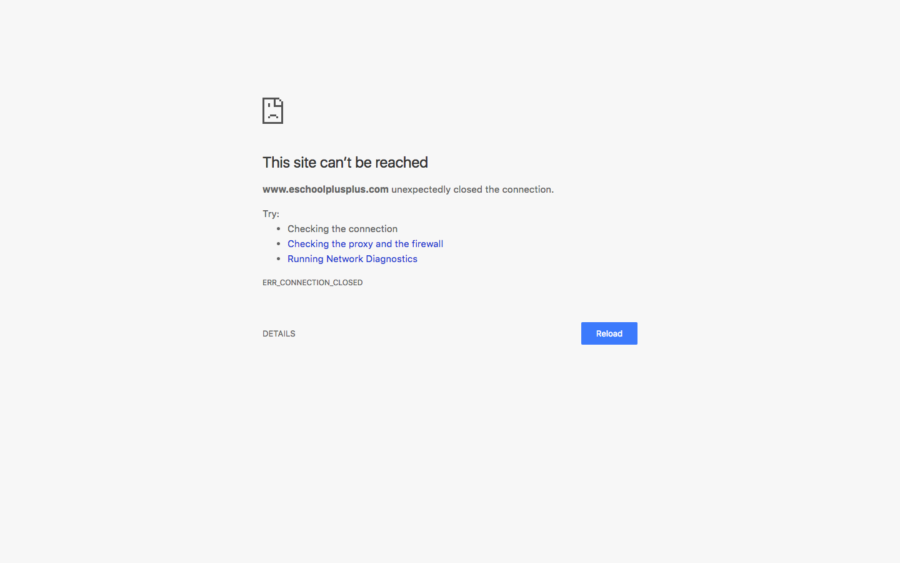 The screen that WHS students see when trying to access eSchoolPlusPlus from school.

For an interactive visual of this section, check out “A Timeline.”

“At that point, I was also well aware of the frustration experienced by students around the lack of a grid schedule on eSchoolPLUS,” Mizoguchi said. “I understood that [the program] was an attempt to fill a need that was occurring here. I actually tried to log in and couldn’t, and that’s why I kind of think it was in the beginning of its developmental stages.”

Brient noted that he was aware of the meeting between Hopps and Mizoguchi, hoping that it would clear up misconceptions regarding his program.

“I was a little worried that the administration would [have concerns] about security and liability,” Brient said. “But it was an independent project that I did outside of school, so [the school] shouldn’t be liable for anything.”

“[Mizoguchi] called my dad, and she said something along the lines of ‘we heard your son made this thing, so we’re probably gonna block it,’” Brient said.

However, according to Mizoguchi, the conversation was more about finding a time to meet.

“I had talked to his dad earlier that week,” Mizoguchi said. “The conversation with his dad was mostly trying to figure out a time when all of us could sit down.”

According to Mizoguchi, Brient’s father was not involved in Brient’s decision-making process, but was rather a resource for Tyler in the coding of the website.

“Our understanding was that [his] dad actually had minimal direct influence on what Tyler ended up doing, but could speak to some of the security issues,” Mizoguchi said.

“My father is part of a health software company. Throughout the process of creating the app, I would consult him on security, because in healthcare software, there’s a lot of concerns about keeping healthcare data secure,” Brient said. “He knows what he’s doing there.”

“It’s kind of a weird interaction to just call the student into your office, and I think they really didn’t want it to be an intimidating moment, so I think going through my dad first was a smart decision, just to kind of separate it from school a little bit,” Brient said.

Mizoguchi and Dolleman meet with Brient and ask him to shut down the website.

“[Dolleman] and I talked to Tyler together just to learn more from the source as to both ‘wow, this is utterly incredible what you’ve done,’ and ‘hmm, these are some of the concerns that have been cropping up,’” Mizoguchi said.

“It was a nice meeting, we talked about security,” Brient said. “They definitely had some concerns regarding their liability for the site, which are totally understandable. [Mizoguchi] complimented me a lot on the site, and it seemed like she was impressed by it.”

However, the administrators also requested that Brient shut the website down completely, to which Brient said no.

“I didn’t feel like I had to [shut the website down], and I was confident in the website’s security,” Brient said. “They definitely had some concerns regarding their liability for the site, which are totally understandable.”

“I asked very nicely [for him to shut it down completely],” Mizoguchi said. “We felt it was necessary to at least make that request, and I went into that conversation wanting to really strike an honest tone with Tyler, which was that ‘you are fabulous, and we have some concerns.’”

“We just wanted to ensure that we were in a safe place when we figured this out,” Mizoguchi said. “He said very nicely that ‘I would prefer not to.’”

“Initially, [their reaction to my saying no] was okay; they didn’t push me too hard on it,” Brient said.

All in all, both Mizoguchi and Brient believe the first meeting was important in establishing communication.

After the meeting, Mizoguchi consulted further with Simon, Dr. Arthur Unobskey, superintendent of schools, and Jorge Pazos, information technology director for the Town of Wayland.

“We also consulted with our own attorney about what our responsibilities were, as far as both, again, really honoring the achievement that Tyler has done and fitting it into the parameters of what we need to do, which is to protect student data,” Mizoguchi said.

At the start of the school day, eSchoolPlusPlus is blocked on all campus servers. It is still accessible on all non-campus servers.

According to Mizgouchi, there was regular communication with the attorney that the district typically consults for issues pertaining to computer security. She noted that a decision had likely been made at a higher level between district technology administration and the lawyer. She was then informed of this decision.

“[Mizoguchi] came to me during my third block class and explained that it’s blocked, we’re trying to figure it out, here’s the deal,” Brient said. “It’s fully in [the administration’s] rights to do it and everything; they can have whatever they want in their network.”

“Everyone was wondering why [eSchoolPlusPlus] was down because a lot of people liked it better than eSchoolPLUS,” freshman Joe Tardif said.

“There had not been a communication with Tyler before we blocked it on campus, and there was no formal communication to students as to why it occurred,” Mizoguchi said.

Mizoguchi noted that the administration had made the decision under advice from district consultation, and the shutting down was mainly due to a lack of information.

“What we were advised to do is while we were trying to figure out what to do, we meshed the two pieces together, like Tyler’s thing and our security requirements, knowing full well that students still have access whenever they’re not here,” Mizoguchi said. “We were trying to put a pause on it while we sort of figure it out. Granted, it takes time to kind of sift through the pieces of that.”

Brient said that he expected eSchoolPlusPlus to be blocked on school servers. While he believes that the action was in the school’s best interest, he doesn’t think it had to happen.

“I think it’s definitely smart for them to cover their hide because they don’t want any extra trouble from a student making a site. I thought it was a right move to initiate the process; I don’t know if the shutting down was necessary,” Brient said. “It didn’t really do very much; it [only] decreased my users a little bit.”

After weeks of trying to arrange a suitable time, Brient and his father formally meet with Mizoguchi, Pazos, Simon and Dolleman.

According to Brient, there was some disagreement between the parties as to the subject of the meeting.

“[They] said that the meeting would be a ‘let’s explain to you why you should shut it down meeting,’” he said. “We said ‘no, hold up, we’re going to do an informational meeting.’”

During the meeting, Brient gave a Google Slides presentation that he made about the program. The presentation included information regarding the website’s technical architecture and the hosting and security of the website on Amazon Web Services.

After the presentation, the district administration asked Brient questions, most of which pertained to the security of student data. According to Brient, the administration was mainly worried about two aspects of the website: the possible breach of the Family Education Rights Protection Act, or FERPA, a federal clause written with the intent of protecting student data, and a possible trademark infringement on eSchoolPLUS.

“My dad [and I] are both very confident that it is not a trademark violation,” Brient said. “I don’t think I feel the need to apply [for a trademark].”

“They ended up being fairly convinced that it was secure,” Brient said.

“Now we have some more information about what the mechanics and architecture of the software is, there’s more of a conceptual understanding about what Tyler has achieved here,” Mizoguchi said. “But there’s parts of that that we also want to make sure can function as a part of our security landscape. I’d say we know more now, because we were finally able to sit down at that table and have a conversation where Tyler could go deeper.”

Next Section: The Future