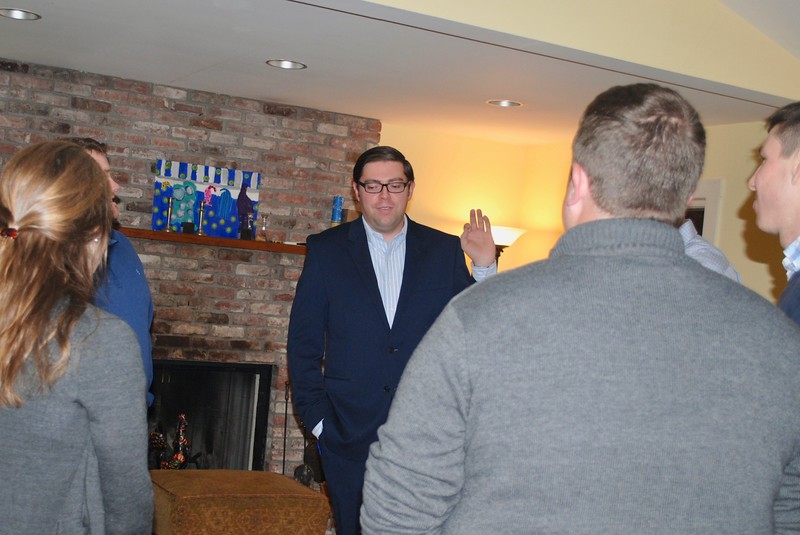 Colin Meiselman spoke with voters during his kick-off event in November of 2017. Meiselman described his stances on education reform, the criminal justice system and gerrymandering on his campaign website.

Colin Meiselman hopes to overtake his fellow competitors for the Democratic nomination and then defeat Republican Sen. Richard J. Ross in the general election. In this article, some of Meiselman’s political beliefs and ideals are detailed. For further information regarding his stances, visit the Issues page of his campaign website.

As a teacher, Meiselman states that he most enthusiastically speaks and cares about education. Meiselman is worried about the potential impacts of developing automation technology and how the current education system may not be sufficiently preparing young students for what could be a drastically different economy. Citing the Los Angeles Times, Meiselman believes 45% of all jobs could be eliminated by technology within just 15 years.

“What that means is we need to do a better job in preparing [students] to be flexible, to be able to change careers and be more mobile than I think we’ve taught students in the past,” Meiselman said.

Meiselman asserts that focusing on building critical thinking skills and straying away from traditional “brick-and-mortar” styles of teaching would better equip students to adapt to their future.

Meiselman describes the traditional style as when a teacher goes up to the front of the class and begins lecturing. Students take notes, take the test, and then “forget that information right after [they] take the test.”

“When you learn about it in teacher school, they call it the ‘sage on the stage,'” Meiselman said. “This person who stands up gives this amazing lecture [and] imparts knowledge onto the students.”

Meiselman admits that he does not think these lectures are very amazing and impactful. Instead, he believes instituting a more dynamic style of teaching is necessary. According to Meiselman, memorizing relatively useless facts and figures should take a back seat to figuring out how students can learn skills that will be crucial for the rest of their lives. Meiselman provides making an argument and collecting and organizing evidence to support that argument as an example of a skill that should be further emphasized in schools.

“It needs to be more on [students] to be in charge of the learning,” Meiselman said. “What teachers should be doing is facilitating that learning.”

Meiselman’s campaign website asserts that politicians who believe only one party has the best ideas or legislators who believe they must always vote with the party have “made Beacon Hill and Washington so toxic.”

“I think what I talk about when it comes to what we need to change in Boston, specifically in the State House, is a need to uphold our values of opening up opportunities for people a little better,” Meiselman said. “Of opening up the process to be more democratic.”

Although Meiselman disagrees with some of the Massachusetts state legislatures’ policies, he recognizes that he does not have complete knowledge of the inner process and thinking of Beacon Hill politicians.

“I don’t have firsthand knowledge of what happens day-to-day in Beacon Hill, but I’m sure there are fantastic people that work there,” Meiselman said.

However, Meiselman does detail three main concerns he has with the integrity of Massachusetts’ state politicians.

According to Meiselman, Massachusetts is one of the least transparent states in the nation when it comes to accessing information. People are unable to view whether a representative voted “yes” or “no” on a piece of legislature, and it is difficult to discern what someone has contributed to a bill or idea.

“If you want to try and find out the votes of your state legislature, whether it be the state representative or the state senator, it’s very difficult to find that out,” Meiselman said.

Meiselman cites the overwhelming supermajorities of Democrats to Republicans in the state Senate (32 to 7 as of Jan. 3, 2018) and House of Representatives (124 to 34 as of Jan. 2, 2018) as a reason why a bill to increase transparency and voter accessibility should be in contention.

Along with making every single one of his votes public, Meiselman mentions this potential bill as something he would want to work on if he were elected.

“I would just publish [all of my votes],” Meiselman said. “I would literally publish everything.”

Meiselman also criticizes the unfair protection of incumbent Senators and representatives in Massachusetts. According to Meiselman, the primaries occur just seven weeks before the general election.

Meiselman asserts that seven weeks to shift gears and reach out to potential voters is an inadequate amount of time.

Finally, Meiselman acknowledges gerrymandering or redrawing district lines to suit re-election purposes, as a problem that is present on both the national and state levels. Meiselman maintains that districts are drawn the way they are in order to maximize opportunities for the political parties in power, whether it be Democrat or Republican.

“Look at the district that I’m running in,” Meiselman said. “From Wayland all the way down to the northern part of Attleboro. Does that make sense to have a district like that? I don’t think so.”

Meiselman suggests the fairest way lawmakers could work for adequate representation in Massachusetts’ state legislature would be to create district lines based on regional connections and geography.

“Wayland should be in a district that has towns and cities surrounding it, not one that snakes all the way down to the northern part of Attleboro,” Meiselman said.

For senatorial district purposes, Meiselman believes the state should be objectively split into 40 chunks, each without any specific or clear biases toward voter demographics.

Meiselman supports the philosophy of seeking out and addressing the root causes of an issue rather than rushing for a temporary solution that falls apart in a couple months or years.

“Too often what we do in government is just place humongous band-aids on literally major flesh wounds,” Meiselman said. “Blood is spurting out and all you do is place a little band-aid on it. It lasts for maybe a little while, but then it comes off and the blood starts spurting again.”

Meiselman believes that legislators opt for the “band-aid solution” because they are easier to implement than trying to get to the root of the issue; additionally, it earns politicians “political points” because they have supposedly discovered an immediate solution.

“All of these [root] issues we discussed are super complicated and take long-term strategies to truly get fixed,” Meiselman said. “However, many elected officials are self-interested and focused on getting re-elected.”

Meiselman maintains that Massachusetts needs people going into state government who are open and transparent about their purpose for being there and will place the constituents they represent above all else.

“I want to serve people and ensure they all have a shot at a bright future,” Meiselman said. “If I am fortunate enough to get an opportunity to serve the people of this district, then I will put them above my own personal job security.”

Meiselman believes this philosophy can be applied to the criminal justice system. He uses the example of nonviolent drug users who are ostensibly unfairly placed in jail for a set amount of time due to mandatory minimums. Meiselman says that rather than punishing a person with a drug addiction and very likely ruin the rest of their life, he would opt to place them in rehabilitation and help them with job opportunities and work options.

“It costs about $50,000 a year to keep someone in a prison in Massachusetts,” Meiselman said. “It costs a heck of a lot less to put someone in a six-week to three-month drug rehab program.”

The Boston Globe finds that the cost of housing a state prisoner for one year in Massachusetts was $55,616 in 2016. The Globe also finds that state spending per inmate increased 34 percent between 2011 and 2016.

According to Miller of Rehab, a 30-day program for standard inpatient addiction treatment costs between $14,000 and $27,000. Miller cites the type and location of the facility, size and length of the program, treatments provided and amenities offered as factors that vary the costs of rehab.

Meiselman imagines placing people in a drug rehab program instead of imprisoning them would save the government money and produce a healthier, more productive population. He thinks that solving issues at the outset rather than slapping a sticker on them would ostensibly benefit multiple aspects of the criminal justice system, which Meiselman believes is intertwined with almost every other issue in society.

Meiselman is a supporter of equality and advocates for not necessarily equal results, but equal opportunity for all people.

“The word opportunity is important,” Meiselman said. “It’s not necessarily about results. We want everybody to find success, but you have to do a little bit of work to find that success. There are people who are willing to do that work, but they just aren’t able to get to that point where they have any sort of breathing room to survive.”

Meiselman acknowledges that the government should provide aid to those who are struggling to get by.

“Should we help people to survive who are literally fighting tooth-and-nail to make it to the next day? Absolutely, we should,” Meiselman said. “We need to think about dynamic and different ways to do that.”

Meiselman also asserts that working to solve issues such as poverty and a lack of strong education in low-income communities would produce a happier and wealthier population.

“We are all created equal, so we all deserve an opportunity to find happiness and find success in life,” Meiselman said.

Meiselman assures he would be a fair, just and cooperative state senator if elected and that he possesses the tools and abilities to work toward real progress in implementing his ideas.

Meiselman believes that even as a first-term Senator, he would already have more political capital than the incumbent, Republican Sen. Richard J. Ross.

Meiselman asserts that because he would be a part of a group that is actually implementing real change, he would be able to affect policies more than Ross could.

“I would literally, on day one, have more influence than what [our district] currently [has] because of that reality,” Meiselman said.

However, Meiselman emphasizes he would not ignore the minority.

“A good idea is a good idea. It doesn’t matter whether it’s a Republican idea or a Democrat idea,” Meiselman said.